A Limnian institution, family-owned O Platanos Taverna has been around for decades. I remember eating there in the early '80s with my dad – the giant plane trees out the front seemingly even larger back then than they are now. Many Greek tavernas are named after the vegetation that grows around them and "O Platanos" is Greek for The Plane Tree. 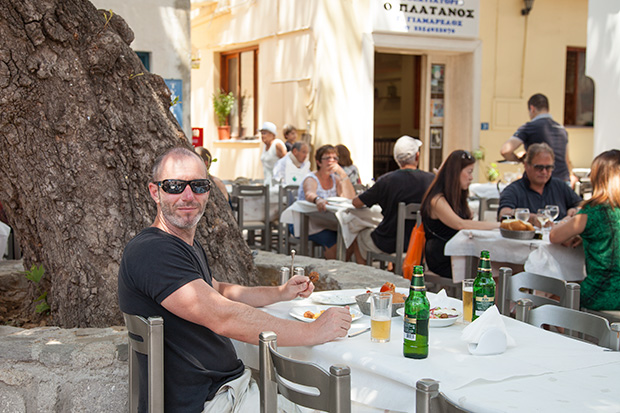 The menu hasn't changed at O Platanos for at least 30 years. Traditional oven-baked dishes are cooked fresh daily ranging from Moussaka and Pastitsio to Yemista and Lamb Youvetsi. But perusing the menu is not the way to choose your meal at O Platanos because as with most Limnian tavernas, less than half of the listed dishes will be available. "Doesn't matter!" as the Greeks would say, "Come see what we have!" It is customary to make your way into the kitchen and view the dishes that are available for the day displayed in large oven trays, and reassures you that what you will be eating will be fresh.

The service is probably the best you'll find on Limnos, with dedicated family members doing all the work and food being brought to your table minutes after placing your order. The prices are also very reasonable, around 5 or 6 euros per main dish.

Lunch time is the best time to dine at this conveniently located taverna, in the middle of the main shopping strip of Myrina, Limnos. O Platanos is open for dinner but expect to be served reheated left-overs from the lunch-time menu.

We'd spent the morning tackling the rocky slopes of Myrina's fortress, Castro (more on that in a separate blog entry to come), and had just completed our second lap of the 1.5km "Agora", which is the affectionate name given to the shopping strip of Myrina, meaning "market street". We were tired and hungry and the aromas from O Platanos were beckoning.

Cold beer in frosty glasses were the first requirement, followed by some fresh crusty bread and "horiatiki salata" (village salad). Greek salads in Greece are great value. For around 4 or 5 euros you are presented with the sweetest tomatoes and cucumber (yes, even the cucumber is sweet), big juicy olives, and on top of the salad will sit a whole slab of feta cheese – a piece this big of genuine Greek feta in Australia costs $8 alone. While the slab of cheese at Platanos was a decent size, it's probably not the biggest one we've seen on a Greek salad. One thing you can be sure of with a Greek salad in Limnos though, is that the feta is made on the island. 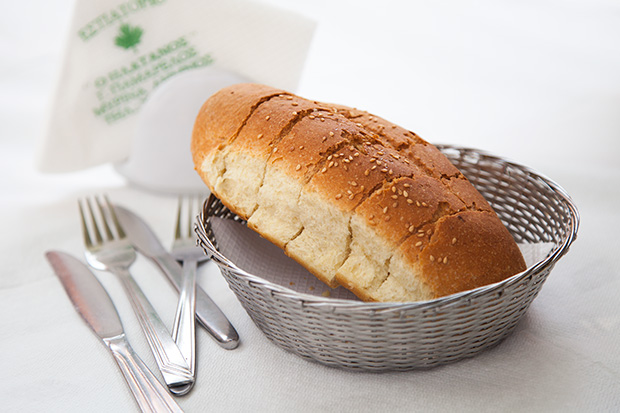 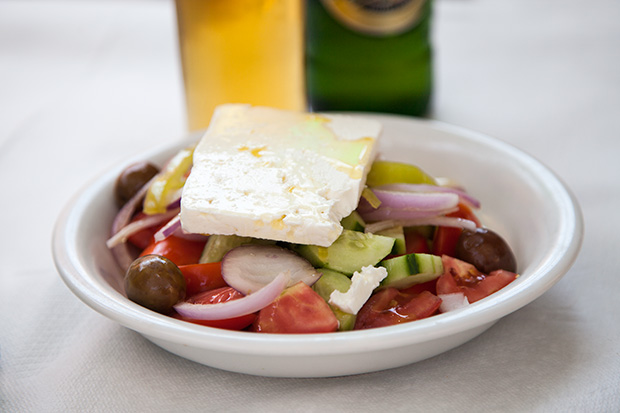 Having recently experimented with a Greek meatball recipe of his own, Tony decided to order the keftethakia to make comparisons. He claims his were better but the meatballs at O Platanos came a close second. He thought they were missing the mint and were a little dry. The chips were surprisingly ok, for Greek chips. 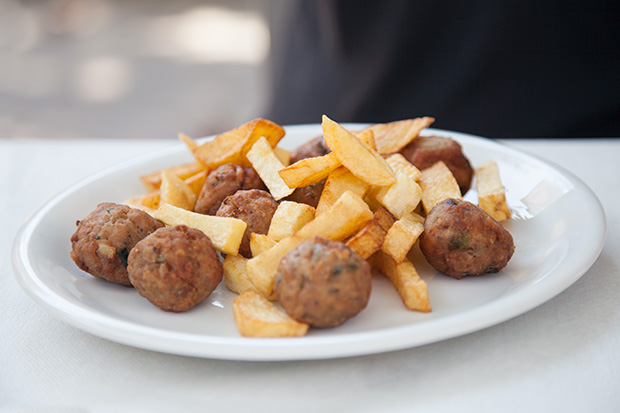 I ordered the yemista which consisted of a stuffed tomato and a stuffed yellow pepper. The pepper was a little on the small side (I think I must have got the last one!), but overall the dish was very tasty, using a variety of herbs like mint, dill and oregano to flavour the perfectly cooked rice filling. There were also plenty of yummy juices in the dish for bread soaking. 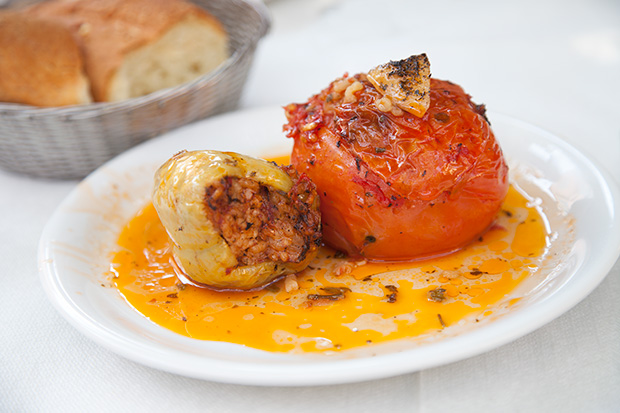 During our meal we were joined by a Greek man from Thessaloniki travelling on his own and grabbing a quick bite before making his way down to the port to take a ferry back to his homeland. Greek people are so friendly. We were taken by surprise at first that he just sat right at our table and started talking to us, but quickly warmed to him and the interesting conversation. He was a professional musician and music teacher on holiday in Limnos. It was a lovely way to spend the rest of the afternoon, talking to our friend about his travels under the shade of the plane trees after enjoying a very satisfying meal at O Platanos. 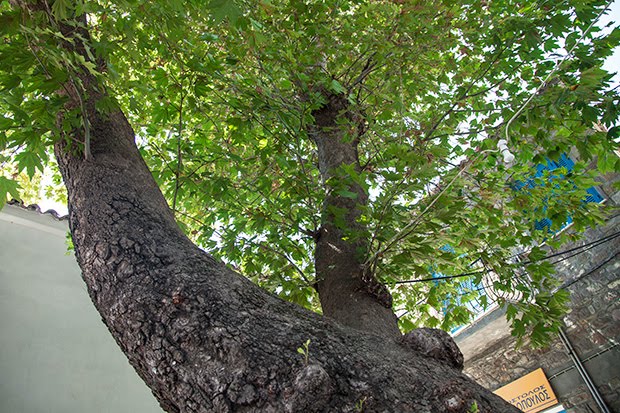