Even though Limnos is the eighth-largest of the 3,500* Greek islands, it is not a huge island – only about 30km across. You can easily get from the west side of the island to the east in about half an hour. (Unless of course you're on a motor scooter with a maximum speed of 40km per hour – in that case you'd be looking at well over an hour.)

* Estimates as to how many Greek islands there really are range between 1,200 and 6,000. Most people say there are 3,500, but it's a big stretch to believe there are even more than a thousand. Only about 200 islands are actually inhabited by people, so perhaps they're counting everything that's sticking out of the water, even if it's just a rock.

Having some form of transport on the island is invaluable if you want to explore the various villages and beaches around Limnos as there is no public transport here. For Tony and I, the ideal vehicle is a motor scooter. We both love the freedom and panoramic views that only a motorbike or motor scooter can provide. And in Greece you don't have to wear a helmet which makes the experience all the more exhilarating. Even at 40km an hour.

After much debate, we decided to hire our scooter from "George Motorbikes", the same George we hired our bike from the first year we were in Limnos together. Our previous experience with him was fine – he gave us a good rate and exchanged our bike for a "more powerful" one in the second week of hiring (we really didn't notice the difference from 50cc to 80cc) – but this year we were put off a little by something that my sister was also a bit disturbed by (she was also in Limnos last month). George keeps his dog tied up on a rope outside his shop all day. The dog has shade, water and food, and a small kennel, but it's heartbreaking to see it confined to this restricted way of life. It's still quite young, maybe only a year old. He is very energetic and gets so excited every time someone comes up to him. He is just DYING to get off that lead and explore and run and do the things that dogs should be able to do.

Before hiring the motor scooter we spoke to George about his dog. He told us that people come by and take him for walks all the time. He reassured us that the dog is happy and every day someone takes him down to the beach or to the park. His name is Rocky and I must say he doesn't look at all unhealthy or depressed. We agreed to take the motor scooter for three weeks, as long as we could take Rocky for a walk. Soon I will write about our walk with our friend Rocky, in a post about the Dogs of Limnos.

We are very impressed with our 50cc Kymco Dink Classic. Not with the power; with the comfort. This bike has BACK RESTS for both the driver and pillion. And there is SUSPENSION – something that didn't exist on previous motor scooters we'd hired here in Limnos, so riding over the many gravel roads of this island is a dream! 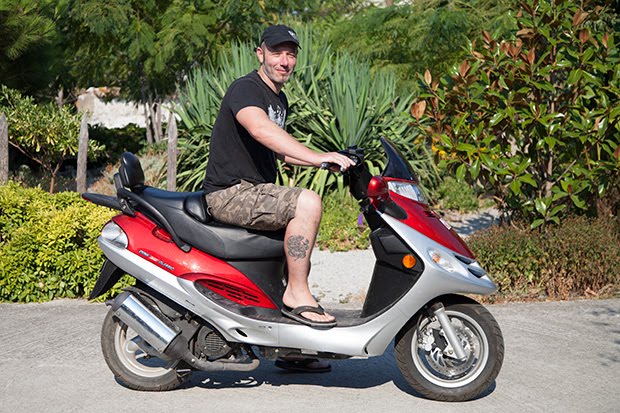 Our first ride was to Moudros, the second-largest town on Limnos. Moudros is a seaside port known for its role in the first World War as an allied base and refuge for injured soldiers fighting in the Gallipoli campaign. There's a large cemetery with many gravestones for Australian soldiers that died in the war.

Moudros is also a lovely place to sit at a taverna by the sea for lunch under the vines on a hot day. It was our hottest day in Limnos reaching 38 degrees. This is very unusual for Limnos. The heatwave over southern Europe has taken everyone by surprise. Some parts of mainland Greece have been reaching 45 degrees. At the moment we have some respite, a huge all-night storm went through Limnos a couple of nights ago and has cooled everything down. Today it's only going to be 30 degrees which is just perfect. But back in Moudros that day we were sweltering and let me tell you, the cold beer that came to our table in a frozen ice-covered glass was an absolute god-send. 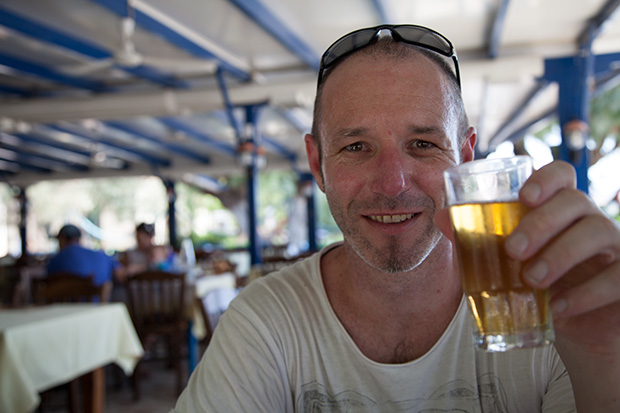 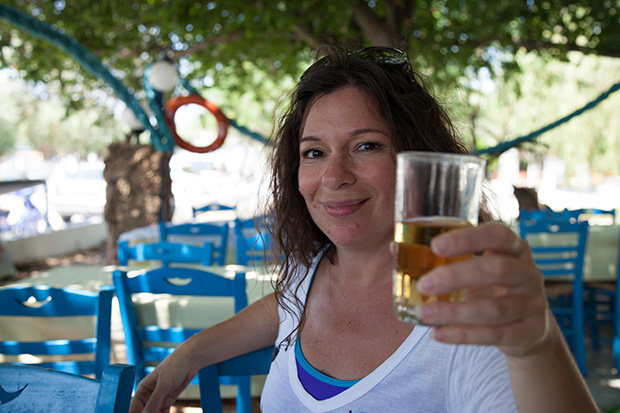 I've written a review of the meal we had in Moudros which you can read about here. The food was great, and the company of a couple of gorgeous kittens playing under our table provided lots of entertainment and distraction from the heat. I nearly used up my whole memory card on photos and video of these little babies. 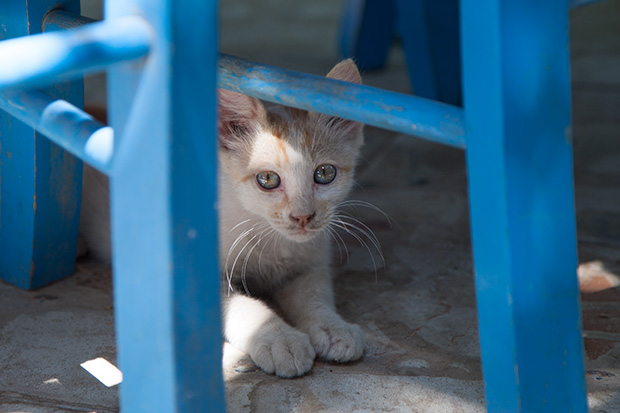 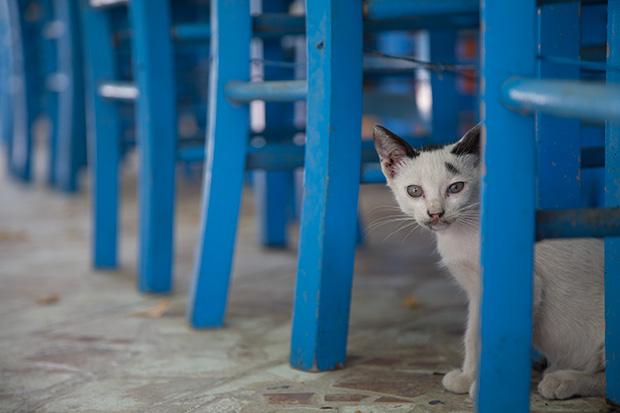 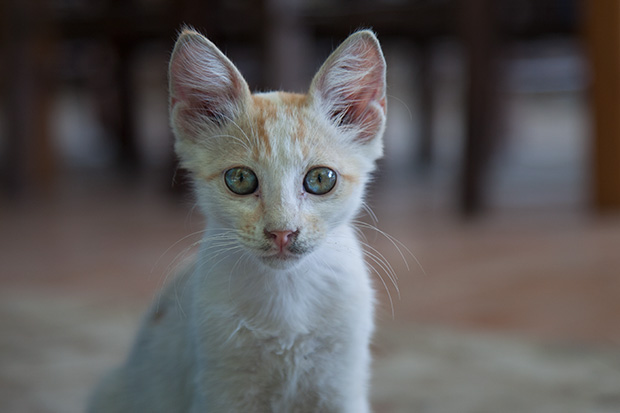 Click here to see one of the videos I filmed of the kittens.

After lunch we went for a walk around the port, many of the fishing boats looking rusty and abandoned. Fishing used to be a big industry here. Now they're lucky to catch a few sardines. In Myrina there's one catch a week of sardines. There's a guy that drives through the main street every Monday with a few boxes of his catch in the back of a ute, announcing over the megaphone like an icecream truck that he has fish for sale. He creates havoc in the streets as cars and people swarm around him yelling with their hands out like there's a famine, causing traffic jams and all sorts of chaos, just for a few sardines. 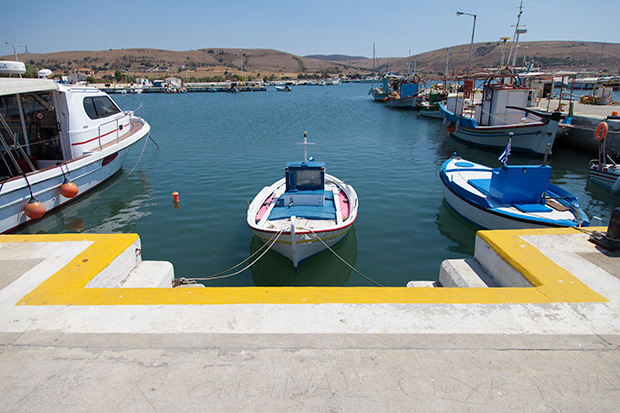 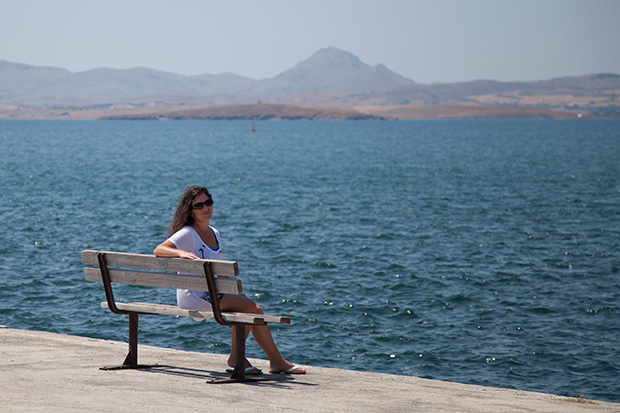 In Moudros I don't think they catch any fish at all. And on that particular day, it was very quiet in the streets and even the taverna was almost empty. It could have been the extreme heat, or perhaps some evidence of the economic crisis starting to hit Limnos.

We headed back to the bike for the trip back to Myrina and were confronted with a small problem. Parking a motor scooter with a black vinyl seat in the hot sun is not a great idea, especially if you're wearing shorts. It was so hot to the touch we couldn't sit on it for at least half an hour! After burning my bum on the seat that day, I now take a towel with me whenever we go for a ride, using it to sit on after the bike's had a lengthy session in the sun.

The time is flying so fast this year and I still have so much to write about. Now that the weather has cooled down a little I will try and spend more time keeping up with the blog! I think there's even a review from an Athens taverna that I still haven't posted!!