After a long first day in Athens we were looking forward to finding somewhere to eat and watch the people go by. Adrianou Street in Plaka is where you will find countless tavernas, restaurants and bars with glorious views of the Acropolis. There are so many eating places to choose from here – all of them busy and most of them serving traditional Greek fare at very reasonable prices. We settled for Attalos because Tony liked the wooden chairs and I could see fried cheese balls on the menu.

The restaurant has a neo-classical facade, common architecture for this strip of tavernas. The interior is decorated with traditional artefacts, including a whole wall of bouzouki guitars, but in the summer months nobody sits inside. 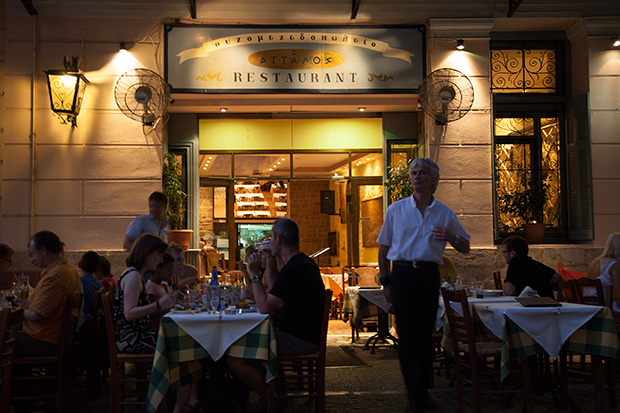 Every Greek taverna meal starts with obligatory bread and a bottle of water. You don't order these, they just appear at the table whether you like it or not, and you have to pay for them. But at 1 euro each, who's complaining. The bread is also a good filler before you order any food, helping to regulate what to choose from the menu. The cheese balls however were a must, no matter how much bread was consumed beforehand. Tony was also eyeing off the Rooster in Red Sauce. 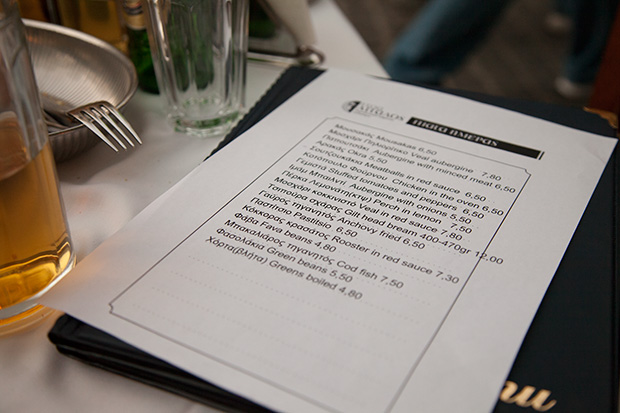 I'm a sucker for anything cheesy and the Greeks do a very good fried cheese ball, usually made with a strong heady cheese combined with mozzarella, rolled in bread crumbs, then deep fried. Served hot, crunchy on the outside and oozingly delectable on the inside, the cheese balls at Attalos (4.50 euros) were some of the best I've tried. There were six on the plate, each about the size of golf balls, served on a sprinkling of crisp lettuce. 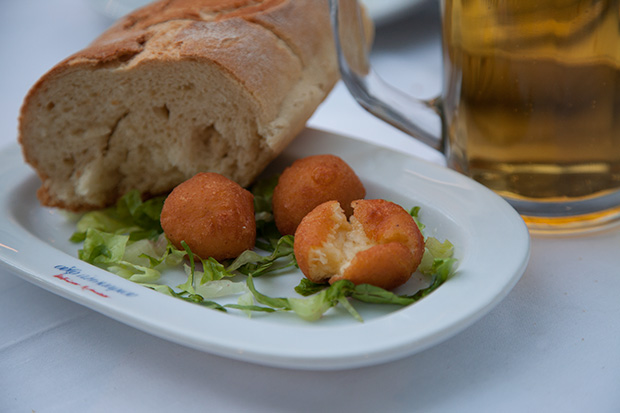 We were filling up quickly after the bread and the cheese and Tony was glad he decided not to order the Rooster in Red Sauce. We ended up sharing a traditional Greek salad of black olives, tomatoes, cucumber, capsicum, onion and a slab of fetta cheese (5.50 euros), and a plate of "yemista" (6.50 euros) which is stuffed tomato and green pepper, served with baked lemon potatoes. The stuffing mixture made up of rice, spring onion, dill and mint was a little on the oily side, but the potatoes did well to soak that up. 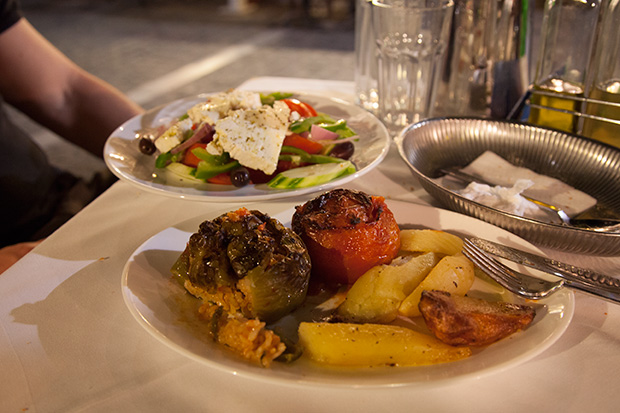 The service at any Greek taverna is slow, particularly when it comes time to attract the waiter's attention for the bill. Their strategy is to ignore you once you've ordered your meal, to try and keep you in their establishment for as long as possible to keep the place looking busy. Attalos was no different and I think we ended up staying there for around five hours. The food was delicious though, and the atmosphere was as lively and joyful as any taverna along Adrianou Street. The air was warm, the beer was cold and we had a beautiful view of the Acropolis. I can't think of a better way to spend a long, leisurely evening.