This dish came about by accident. Tony needed a tomato-based sauce to accompany the Keftethakia (fried meatballs) he was cooking up. The intention was to prepare a rich napoli sauce to pour over the meatballs, and boil some risoni separately to serve on the side. In the final stages of reducing the sauce, I thought it might be better to add the par-boiled risoni to the sauce and let it finish cooking in the sauce. I put the lid on, turned down the heat and ten minutes later when Tony asked for the sauce, I lifted the lid to discover there was no longer sauce. Just a pot full of tomato-tinged risoni! Tony was mortified. But tsatsiki, the new accompaniment for his meatballs, would have to suffice, and the accidental tomato-tinged risoni was now to become a side dish of Vegetarian Youvetsi. 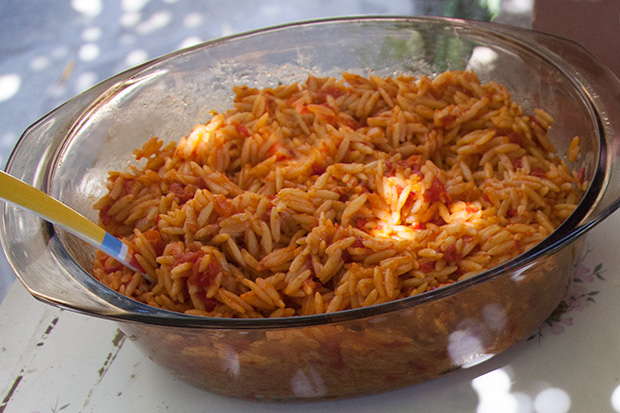 Youvetsi is traditionally made with lamb and cooked in the oven for several hours. I'm sure Youvetsi experts would be horrified to know I didn't cook my vegetarian youvetsi in the oven ... which is why I didn't mention that detail to anyone that day. Everyone was so impressed with the flavour, especially given it had no meat, that I didn't want to spoil the moment. I'm not even sure some of them realised there was no meat in the dish! I thought it best to just accept the positive feedback and not reveal any of my "secrets"! ... Until now:

Melt the butter over medium heat in a large heavy-based pot and add olive oil. Add onions and turn down heat. Fry for 20 minutes or until onions are golden and caramelised.

Meanwhile, score (in a cross shape) the bottom of each tomato with a sharp knife and blanch tomatoes for 20 seconds in boiling water. Remove tomatoes from boiling water and immediately place in a bowl of cold water. After a few minutes the tomatoes will be cool enough to handle so you can easily peel off the skins.

Chop the tomatoes finely and add to onions along with tomato paste, wine, bay leaves, cinnamon and honey and stir thoroughly. 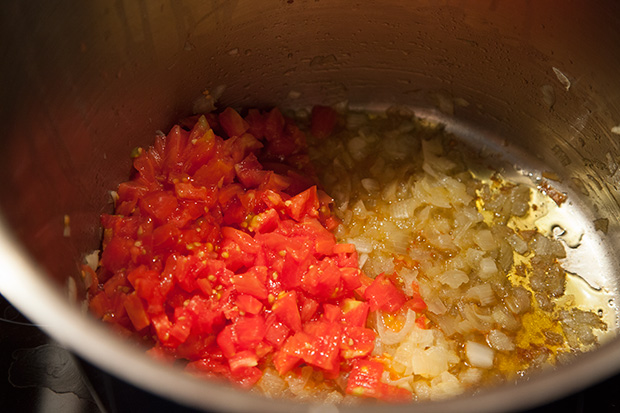 Remove capsicum slices from the plastic bag and peel off the skins. Cut into small pieces, add to the sauce and stir.

Allow sauce to simmer uncovered on low heat for at least one hour, stirring occasionally.

Place two cups of risoni in boiling water and cook for ten minutes. Drain and transfer risoni to sauce during final 10 minutes of sauce cooking time and place lid on pot.

After 10 minutes turn off the heat and leave pot on the stove for another 10–15 minutes to allow all the sauce to be absorbed by the risoni.