It was more than two weeks ago now that we were enjoying lunch at Hermion Restaurant on our last day in Athens, and I only just realised today that I still haven't written the review. The heat in Greece has burned away a few brain cells I think.

It was our last day in Athens before flying out to Limnos so we tried to fit in as much as we could that day. Probably not the best thing to be attempting when it's 39 degrees. After a train trip up to Kiffisia, and a hot and sweaty adventure on foot around Athens looking for the Hellenic American Union adult education centre (Tony is learning Greek through their online courses), we thought it would be fitting to cool off for lunch under the shade of Hermion Restaurant in Plaka.

My dad had taken me to this place the first time I ever went to Greece when I was 16 years old. I remember pergolas densely shaded with grapevines and dad running into an old friend there that he hadn't seen in years. Ever since that day back in 1983, my dad has always told me "Next time you're in Athens you must go back to Hermion". For one reason or another there hasn't been the opportunity to go back there, until now.

Hermion Restaurant is hidden away from view behind some old buildings in Plaka, near the Mitropoleos Cathedral. There is a sign on the footpath directing you through the arcade that takes you to the restaurant, but it's easily missed. You are lead to a beautiful shady courtyard, only now there are mostly canvas canopies instead of grapevine-laden pergolas. There is also a large indoor eating area for the winter months.

The food is lovely. Traditional Greek fare but still lovely. Not too oily and really fresh ingredients. There weren't many people there so the service was excellent. There was also some live music by way of a duet of musicians, one on classical guitar and the other on mandolin, playing mostly traditional Greek love songs from the 1940s and 50s. 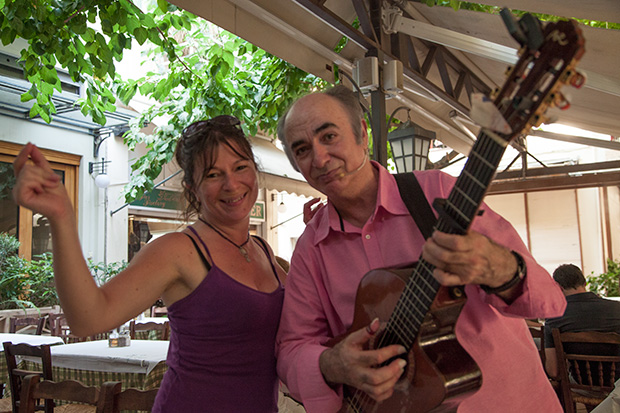 The obligatory bread came with some plump black olives and a creamy cheese dip. We also ordered saganaki (fried cheese), village salad, zucchini fritters and spaghetti bolognese. I seem to remember dad telling me Hermion is famous for their spaghetti bolognese so I insisted Tony order it. Dad later told me he never said anything of the sort so I'm not sure where I got that idea from, but Tony loved it nevertheless. He said it had a very exotic taste with hints of cinnamon and cloves. The saganaki and zucchini fritters were freshly prepared, crisp on the outside and soft in the middle, and the salad had the sweetest, ripest tomatoes we'd eaten in Athens. 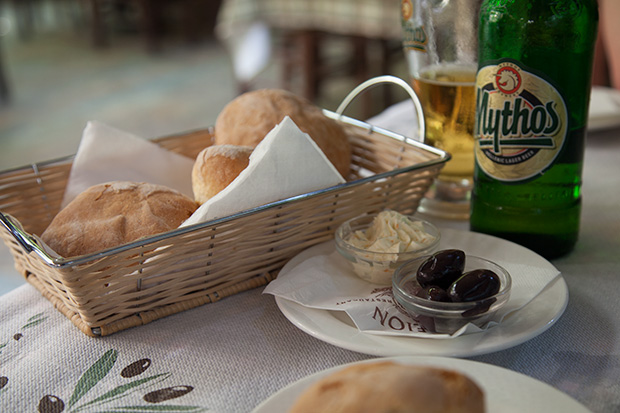 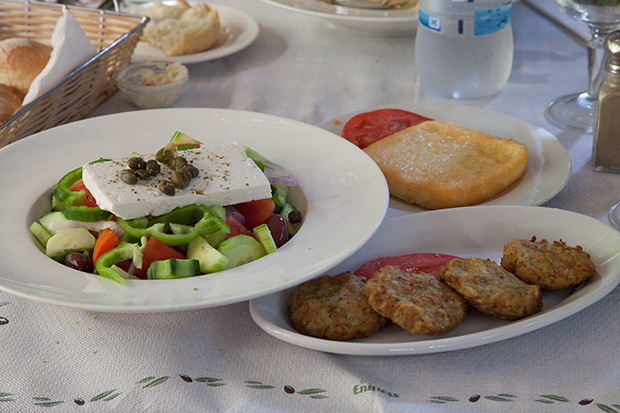 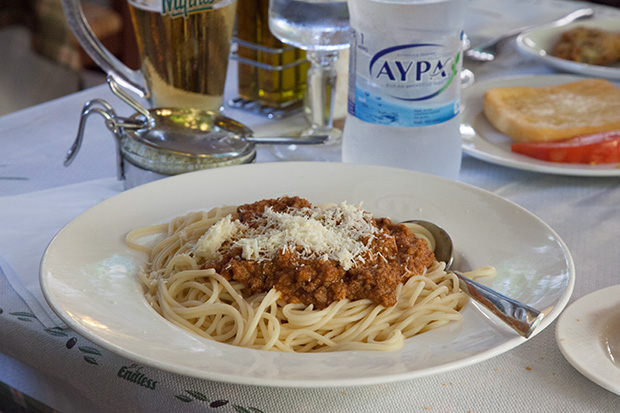 We couldn't really fault any of the dishes except for the creamy cheese dip that came with the bread. It appeared to be sweetened whipped cream with a little bit of feta stirred through it. Just a little bit weird for our likings.

The setting, the music and food of Hermion Restaurant are three very good reasons to relax here for lunch on a hot Athenian day, and yes dad, next time we're in Athens we will definitely be going back to Hermion!