Crusted chocolate mousse log, dehydrated olive crumb, candied capsicum and pear compote, almond praline and dutch chocolate ganache ... As I nod off here in my economy seat with Tony's notebook, 12,000 metres above sea-level, I'm dreaming about the final dish of an eight-course extravaganza Tony and I indulged in last night at The Press Club. 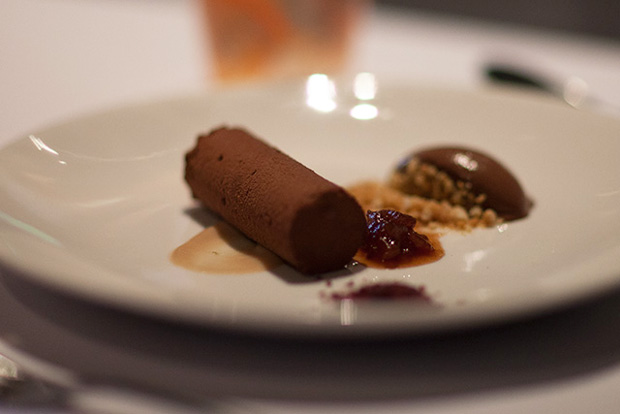 A tradition for three years now, on the eve of departure we begin our Limnian adventure with the Symposium Degustation dinner at George Calombaris' restaurant, The Press Club. We are really impressed every time we go there, but this year was exceptional.

The service at The Press Club is absolutely impeccable. Seven different staff members each attend to your needs for the evening from greeting you at the door and taking your coats, to bringing out your dishes and describing in detail everything on the plate – five different waiters taking turns to present each beautiful course of the degustation. They were also more than happy to cater for my dietary needs, preparing a vegetarian version of the eight courses for me and a meat and seafood version for Tony. You feel really special walking into this place. 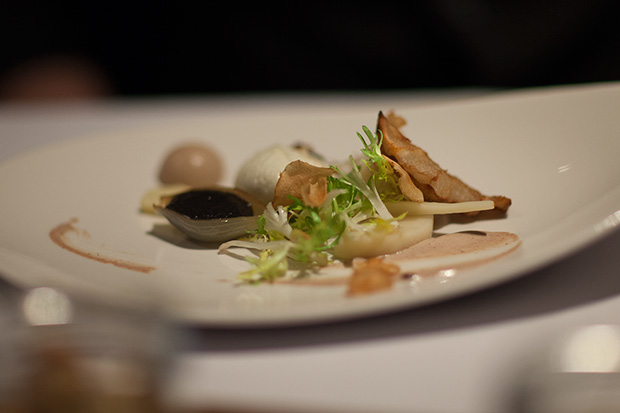 Attentive, diligent staff can make any restaurant experience pleasant, but when amazing service is matched with amazing food, the experience is then truly memorable. Every single one of those eight plates of Greek-inspired yumminess was not only a delight to the taste buds, but a beautiful work of visual art. We spent a good three or four minutes admiring each one of these delicate little presentations as they were placed in front of us. They were almost too lovely to eat. 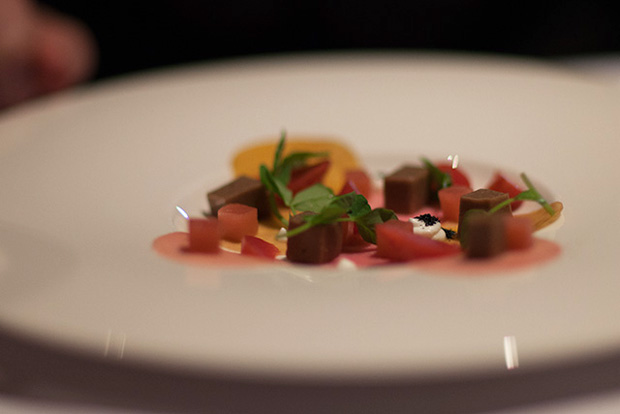 Every dish was augmented by a featured element that defied what you'd think the scope of creativity in the kitchen could reach. Crunchy chocolate rice wafer under a fillet of venison, miniature truffle-infused mushrooms (they were truly microscopic) on a cauliflower puree, beetroot jelly and black Santorini salt. These were just some of the combinations of elements that fascinated us. 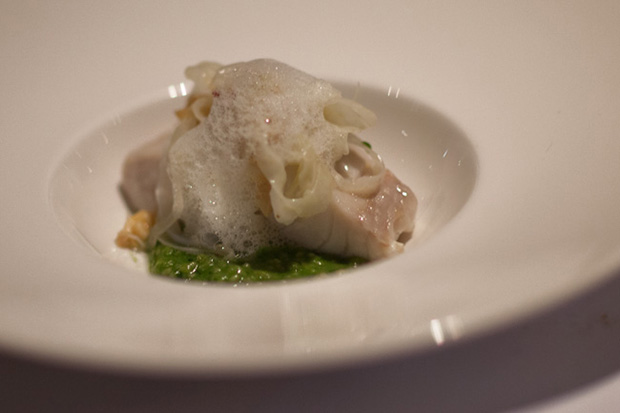 But it was the mousse log dessert that we both found absolutely mind blowing. It was the stand-out dish of the night - the combination of black olive with chocolate was a completely unexpected but heavenly taste sensation. And capsicum and pear! Who would have thought?

At $135 a head, the once-a-year eight-course Symposium Degustation experience for us at The Press Club is worth every cent. There's also the option to have wine tastings with each course for an extra $95 but Tony and I opted for choosing our own drinks. Tony had a red beer by Greek brewery, Craft, and I indulged in a $24 glass of French champagne.

We're about six hours into our flight, already feeling restless and tired, still 20 hours to go but still so excited about coming to Greece. This year I predict a food-oriented theme for the blog, having decided to include taverna reviews and recipes. Last year I didn't pay enough attention to the details and techniques of Koula's cooking, or the improvisation of my dad's concoctions so I want to make sure it all gets documented this year. As for taverna reviews, there'll be no shortage of those as Tony and I find it very hard not to go out for dinner every night while in Greece. And while The Press Club is not in Greece, it counts as our first "taverna review" since it marks the beginning of this year's Limnian Tale.

When next I write, we will be settled in our hotel in Athens after a long day of wondering the market streets of Plaka. But there is still a long flight ahead of us and time to go back to dreaming about black olive crumb...

Hope you both enjoyed the flight o'er.

WOW! This is really an amazing and attractive post about a tale of food mystery. I appreciate your posted wonderful photos. Thanks for sharing such an interesting post.