The first episode of Lyndey and Blair's Taste of Greece documentary series (screened on SBS) featured Lyndey cooking in the kitchen of Kuzina, a contemporary Greek restaurant in Adrianou Street, Thissia, just west of Plaka. Tony and I were keen to eat at Kuzina on our second night in Athens, having seen the feature story on SBS earlier this year.

Right next door to Attalos where we'd eaten the night before, we were more than happy to once again embrace the atmosphere and Acropolis view of Adrianou Street. 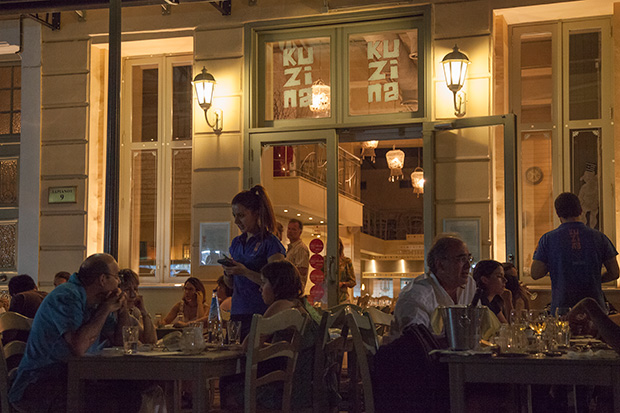 Kuzina is a little more expensive than most of the other restaurants along Adrianou Street, but still very reasonably priced compared to what you'd pay in Melbourne, averaging around 10 euros per dish which at the moment is the equivalent of less than $12 Australian. 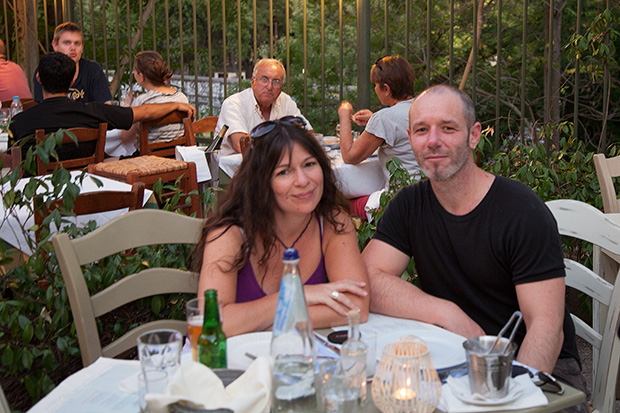 The service is noticeably more attentive, the waiters taking an interest in their patrons and striking conversation that isn't just about where you are from and how long you are in Athens. The freshly-baked sunflower seed bread and water promptly arriving at the table, with the addition of a small plate of herbed olives and virgin olive oil. 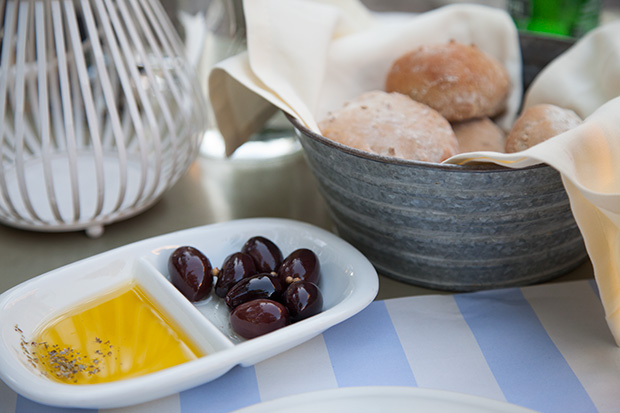 The menu is impressive, by design and content. Their quirky logo and illustrative typography instantly appealing, but it is the creative, left-of-centre food on offer and the care taken in the descriptions of the dishes that catches your eye. My eye was instantly drawn to the zucchini minted cheese balls with yoghurt sauce, and Tony couldn't go past the grilled meatballs with sumac, pitta bread and spearmint sauce (both dishes 10 euros each). We also went for the salad of wild greens with dill, basil, fetta, tomatoes, capers and bagel croutons (8.50 euros). 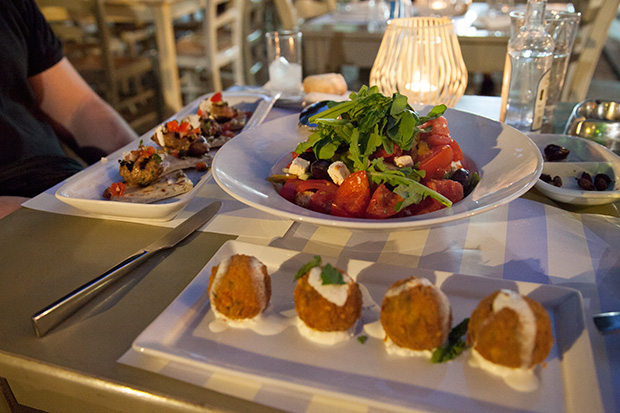 The flavours were a refreshing, modern take on the Plaka staples, and dishes were plated up with restaurant quality finesse. Tony loved his meatballs, describing them as having a middle-eastern flavour, my zucchini balls were lovely and the tomatoes were the sweetest and juiciest of those tasted so far in Athens. The only disappointment was the presence of just one small crouton found in the salad, however this certainly won't stop us from coming here again.

Hi guys
you both look like you are WARM and relaxed and the food does look excellent, enjoy xo kylie b