The downside to a relatively decent amount of sleep on a long-haul flight is ending up with elephant legs. Fluid retention of the ankles from not moving around on the plane is a painful condition to endure if you want to spend your first day in Athens walking around the cobbled (the VERY cobbled) streets of Plaka.

It was an 8.00am arrival in the capital city of Greece, and stepping off the plane to inhale that familiar mixture of diesel fumes and cigarette smoke always puts a smile on my face. "We're in Greece!" We were so excited to be back in the country that is close to my heart and Tony has grown to love.

We piled our luggage on to the X95 bus for the 45 minute journey from the airport to the centre of Athens at Syntagma Square. At 5 euros this bus trip is great value, and the drop-off point is only a ten-minute walk to our hotel.

We are staying at Athens-Cypria Hotel, just off Ermou Street which is the main pedestrian shopping mall of Athens. The mall leads you to the lively flea markets and tavernas of the old part of town called "Plaka", the home of the Acropolis. The streets are lined with lottery ticket vendors, stray dogs, buskers and gypsies selling everything from fake Louis Vuitton handbags to packets of tissues. There's noise, food, music and lots of tourists. This is the place to be if you want to experience an intense dose of Athenian joy.

After checking into our hotel we ignored our bodies' cries for sleep and headed straight for the cafe downstairs for our first frappe. Cold, black coffee in a tall glass, finished with a thick layer of crema and ice cubes. It's so European. Everyone drinks them here. It's so refreshing to see people preferring these over a beer. Even the young'ns love them, right into the night when the city really comes alive and the nightclubs are pumping, hoards of confident 20-somethings sipping on their frappes, loving life without alcohol. Such a different culture to Australia.

The first port of call was a leather sandal basement stall in the flea market – I needed some new thongs. I'd bought a pair from the same shop last year and knew I was on a winner, so this time I bought two pairs while Tony practiced his Greek on the spruiker at the entrance of the shop.

We went for a bit of a wander around the market lanes, Tony found a t-shirt printing shop that he would later come back to with his USB stick that contained an image of a Dr Seuss character from one of his childhood books to have transferred to a t-shirt. The markets are still thriving, despite the economic problems. We know the country is going through hard times with unemployment at 25% and people having to now pay very high taxes, but tourism certainly doesn't seem to have been affected by the crisis. Bum-bag laden people are everywhere, armed with multiple shopping bags all having a good time.

The heat was quite stifling, around 37 degrees, and elephant legs don't go very far under these conditions so we made our way to the nearest shaded taverna we could find to relax with a cold beer – it would be un-Australian if we didn't.

By 2pm we were utterly exhausted and it was time to give in to our new way of life for the next six weeks and head back to our hotel for a nap. They call it siesta here in these mediterranean countries. For a period of around 4 hours, from mid-afternoon to early evening, all the shops close and everyone goes to bed. At 7pm it all comes back to life, like a brand new day. Everyone is refreshed and ready to take on the night for more food, fun and frivolity. After a few hours sleep I still felt like an elephant but not one to waste time when on holiday we headed back into the laneways of Plaka to find somewhere to eat.

We'd been watching the re-runs of Lyndey and Blair's Taste of Greece documentary series on SBS earlier this year and I remembered an episode where they visited a taverna called "Kuzina" in Plaka. The point of difference for this place was that it explored a different take on traditional Greek cuisine by introducing flavours outside of the safe tourist pleasers. We'd not had a chance to look this place up yet but decided that before we left Athens we would find out where it is and make a booking. In the meantime, on our first night in Athens we would eat at Attalos Taverna on famous Adrianou Street - this street is jam-packed with tavernas, one after the other. This will be my first official taverna review which I will post here in the next day or two.

Whilst enjoying our meal, we were discussing the plan to find and book a table at Kuzina, and concerns were raised that since it was featured on the documentary it might require weeks of advanced notice to secure a booking. It was also possible this place was not within walking distance from our hotel. While pondering and observing the other tavernas filling up around us, I was admiring an interesting logo design at the eatery next door. A set of hand-drawn letters arranged in a block shape with a sketch of a chef's hat underneath. "KU" on top, "ZI" underneath ... oh my god it's Kuzina. Of all the hundreds of places to eat in Plaka, there it was right next to us!

It was a big day and it was time to get back to our hotel for some much-needed rest and recuperation. We have another five full days to enjoy in and around Athens. On the agenda is a day trip to Delphi, a three-island cruise, a visit to my mum's cousin Aliki, the Acropolis museum, the southern beaches of Athens, and the Hellenic American Union campus (this is the school Tony's been learning Greek online with). Lots to pack into five days but looking forward to seeing more of this beautiful part of Greece.

Tony on the X95 bus from the airport to central Athens: 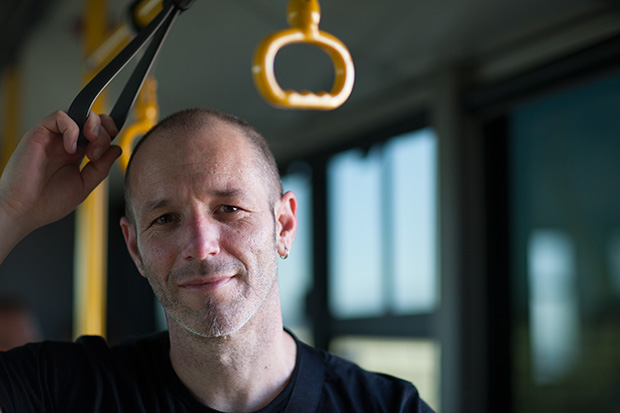 Chaotic traffic of Athens (smoking while riding a motorbike is obligatory in Greece): 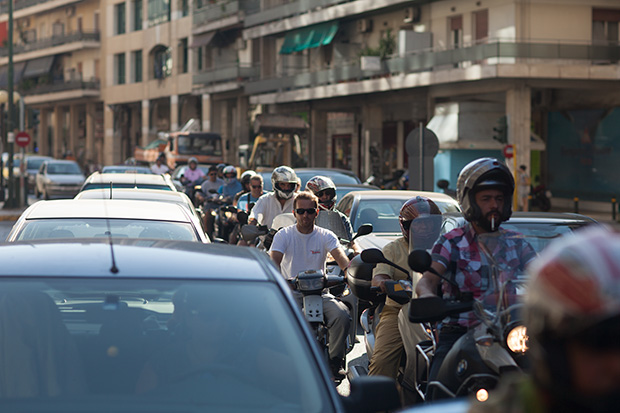 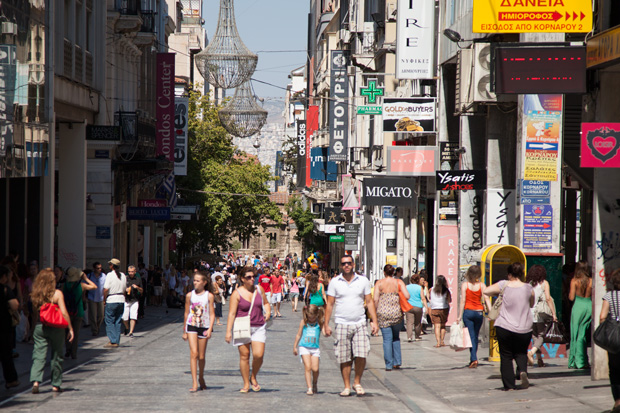 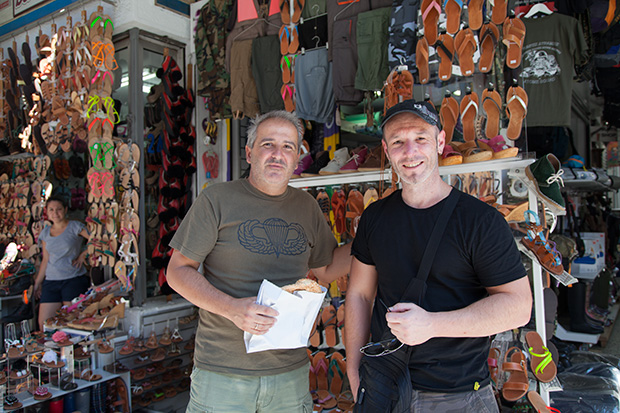 Young busker on the streets of Plaka: 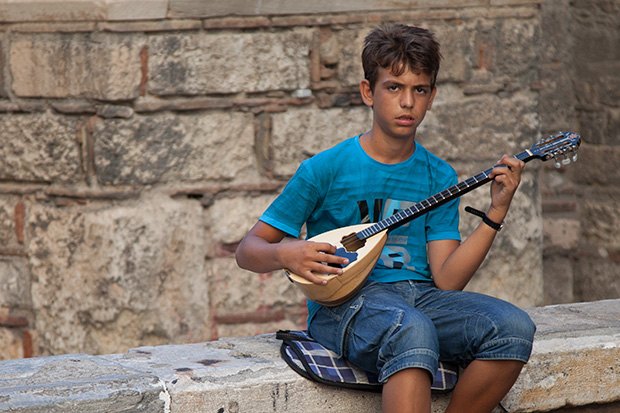 Stray dogs are now part of the scenery in Greece, having taken over the territory once dominated by cats. There is a government program that looks after these dogs, capturing them for health checks, desexing and registration, then releasing them back on the streets to be fed by tourists and locals. For strays, these dogs are relatively healthy and seem content with their place in the streets, pretty much keeping to themselves: 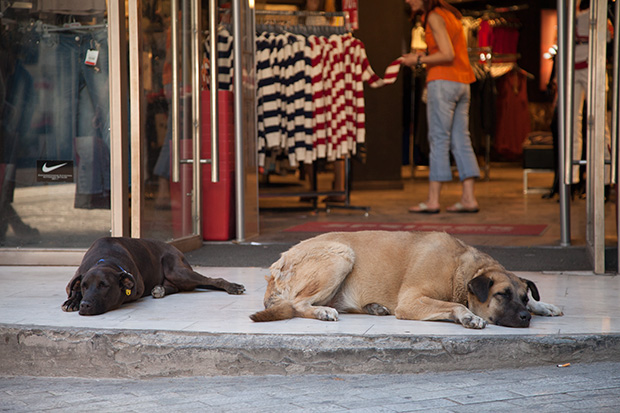 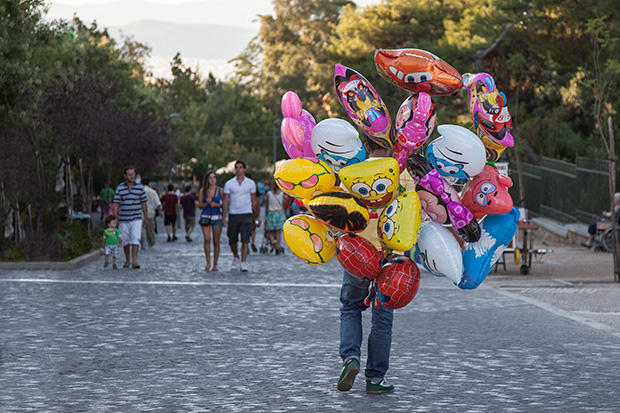 Waiting for our first beer: 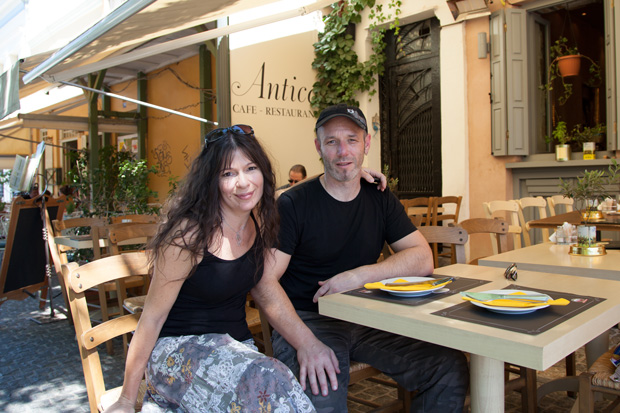 Their population is diminishing but a few cats can still be found in the Plaka district: 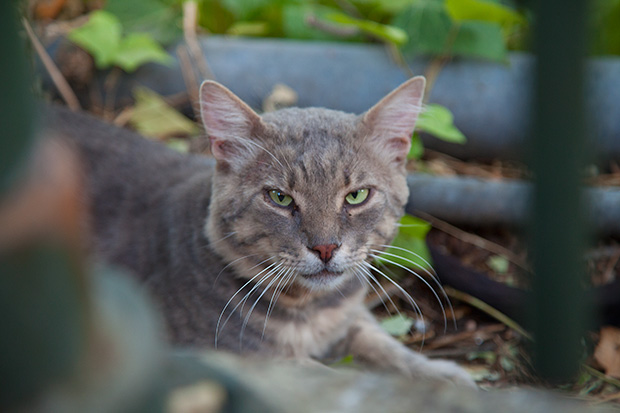 The streets are quiet and the shops are closed during siesta time: 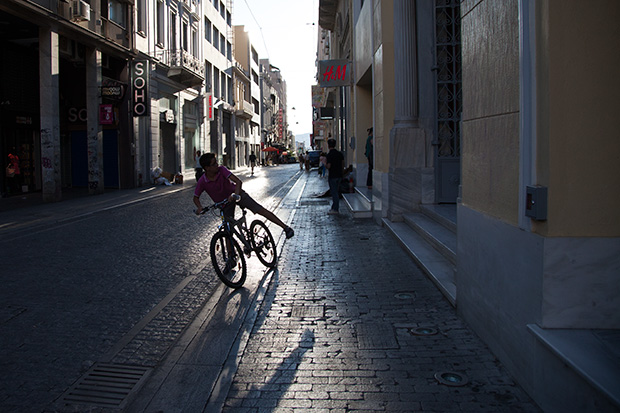 Fantastic to read your first entry! Imagine being right next to Kuzina, what a coincedence! Does this translate to cuisine? Or kitchen?

I'm totally blown away by the stray dog program, could you imagine something like this in Melbourne?!

Hope you rest well at the hotel, oh, and LOVING the pics!! :)

Hi Christine, yes the stray dog program is great isn't it? It came about because the original plan was to poison them and there was such a huge public outcry, and so many people were prepared to volunteer to help, that they decided to take a much more humane approach to fix the problem.

Kuzina means "kitchen".. the review is coming soon. It's so hard to maintain the blog when you just want to spend all day outside!!

hi guys
I love the pics they are really amazing and the idea of shopping in the warmth very appealing,
hope you are relaxed and enjoying every bit of your holiday
xoxox Kylie b