The landscapes of Limnos during the summer months are spectacularly dry and rugged. In the spring, wildflowers and lush grasses run rampant after the winter rains, then as the dry July sun sweeps over the island, all traces of green are quickly evaporated leaving just the tinder remains of spent thistles and tumbleweed. But the broad spread of these brilliant yellow remains against the soothing blue of the sea and sky is a colour combination that works so well in this environment.

This is standard Limnian summertime landscape. But as I've mentioned earlier, Limnos always has something unexpected around the corner, as was discovered on our trip to the little church in the cave.

Last Thursday was a little cooler, and upon Kosta's advice to take the trip when it's not too hot, we set off on the moped to take on the rocky road and mountain climb to Panayia Kakaviotissa church.

We have seen the mountains of Limnos from afar, but this would be our first time exploring the landscape from within. The gravel road that takes you to the area is a challenge in itself, resembling a rocky goat track, as most Limnian unmade roads do. As usual, I had to get off the moped several times so Tony could make it up the more hazardous parts of the road. Once we exhausted as much of the track as any vehicle could, we parked the bike and loaded with camera gear and bottled water, continued the trek on foot. The landscape was already changing, from the familiar dry yellow against blue sky, large rocks and volcanic formations started to emerge. Further along, tectonic plate movement was evident, not unlike the Grampians landscapes of Western Victoria. It was incredibly dramatic, and with the backdrop of some equally dramatic clouds in the sky, out came the wide angle lens.

The climb wasn't as treacherous as we'd expected. It was mostly just steep steps, with only a few stretched leg splits required to lift ourselves up some rocks. The surrounding vistas were so distracting though, we didn't notice the efforts we were putting into our climbing.

The church itself is only small, it has no roof and is no higher than Tony's waist, but it has all the trappings of an able-sized church and serves its purpose as many visitors make the pilgrimage to the area for genuine religious reasons.

It was difficult to capture the scene of the church inside the cave in a photograph, having not much room to stand back and get the whole thing in frame. There was another mountain opposite the cave from which I could have taken the perfect photograph, taking in all the scope and drama of the area, but unfortunately this mountain required some serious absailing which I wasn't quite prepared to do. The surrounding landscape already provided such beautiful photographic material anyway. It was a magnificent way to spend a morning.

On Friday it was compulsory for us to take another boat trip. This time we navigated the south part of the island, again in a traditional kaiki. We've never seen this part of the island with its sheer ochre cliffs and deserted beaches. The people we shared this trip with were much more interesting than the set we travelled with to Agios Efstratios on Tuesday. Spending the day on a boat with a group of people that you can talk to and laugh with is much more fun than just a boat-load of Greeks wanting to get from one place to another. The "host" of the boat, Litsa, was also extremely entertaining and funny. She is also the owner of the boat. She has been doing these trips for 17 years and she is as dark brown and leathery as a date, but knows everything there is to know about Limnos and its spectacular coast. We stopped at some beaches to swim and explore, as the captain of the boat collected some "fousca" from the rocks which is a type of sea urchin. Later, on the boat, he offered these salty delicacies to those willing to risk anaphylactic shock. As Tony had tried one of these last time we were in Limnos, he readily accepted the gesture to suck the slimey orange thing straight out of its shell. Yuck. And I got it all on video.

I know I've said this before, but it's hard work coming inside writing on the blog when the weather is just so perfect outside. I also know that in Melbourne it was 13 degrees today and in nine days' time we will be wearing skarves, jumpers and flannelette pyjamas back in Elsternwick. We are painfully aware that these warm days are running out, but there is still so much to do, and of course to write about, so we will endeavour to keep posting on the blog as often as we can. Tomorrow I will write about our stray dog-feeding mission, the big party we had here last night for the name day of Panayia, and our moped adventure of today to the Gomati sand dunes.

It's only 9pm but down at the marina things will just be starting to liven up. People will be filling the tavernas, there will be music in the streets and all the shops will be opening again for the night shift. The rest of the family (Dad and Julia, George and Koula) have now retired for the evening - they get up very early and are not really into the nightlife here in Limnos. I'm now getting bitten by mosquitos in this confined area where the computer is, and Tony is outside obsessing over his Rubik's cube, so I think it's a good time for us to get out into that evening sea breeze and take a walk down to the marina. Oh what a life.... 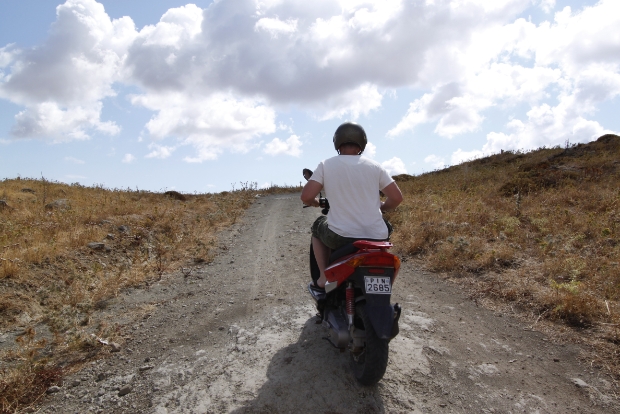 Trying to make it up the hill is a challenge, even without me on the back. 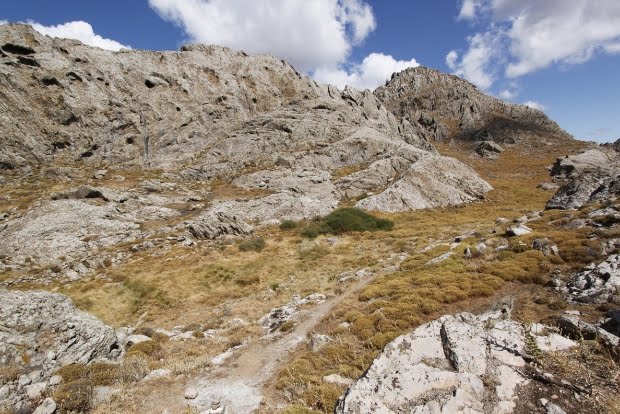 Spectacular rocky mountains to the little church in the cave. 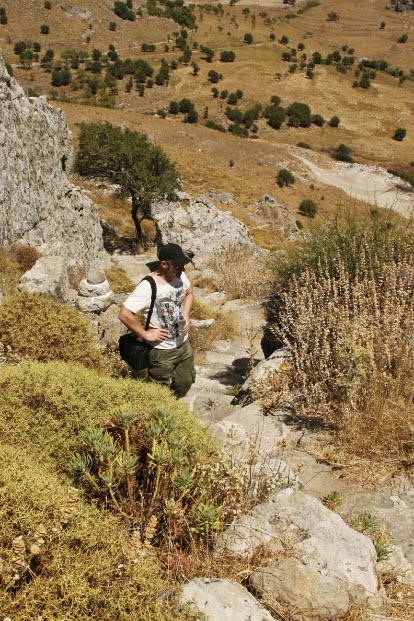 Below: Lots of rocky mountain photos. 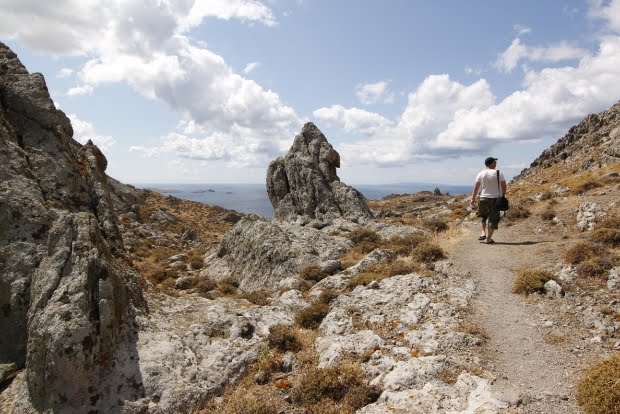 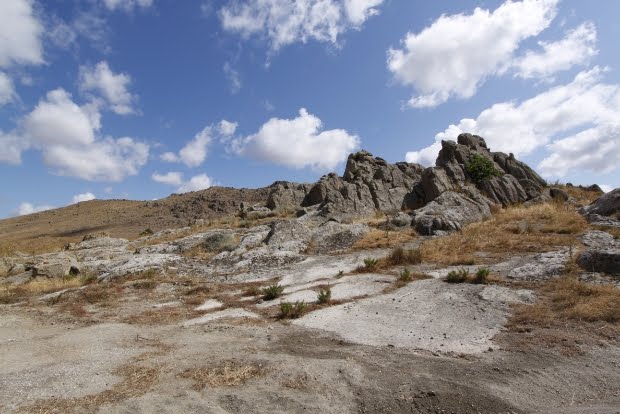 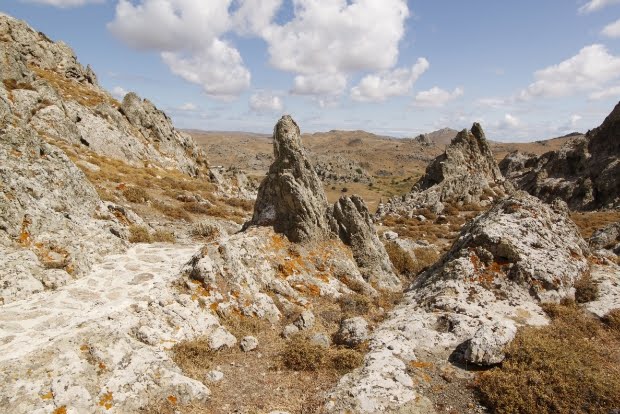 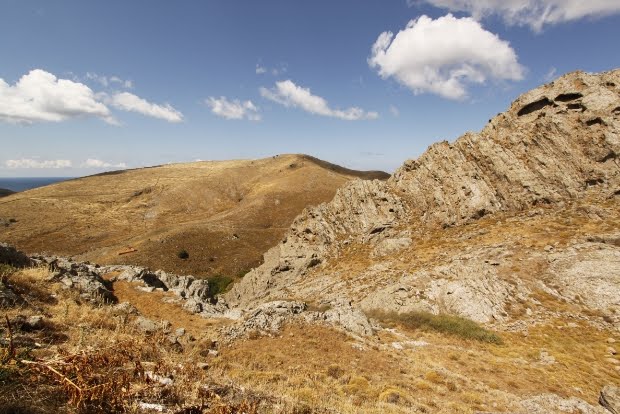 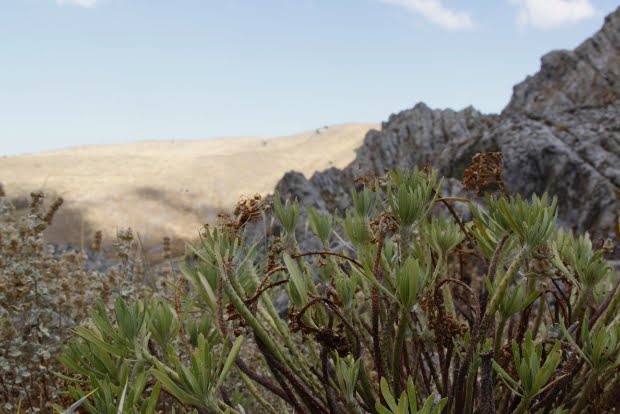 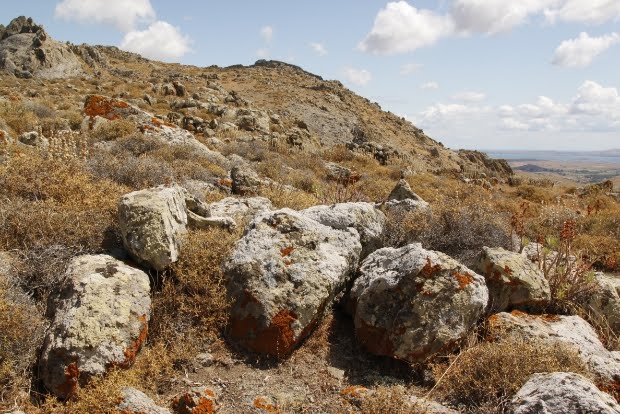 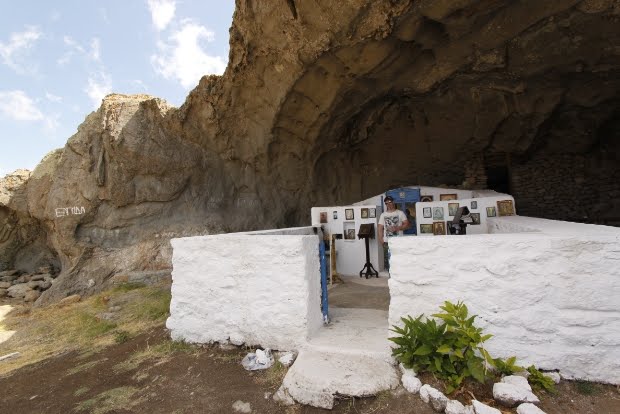 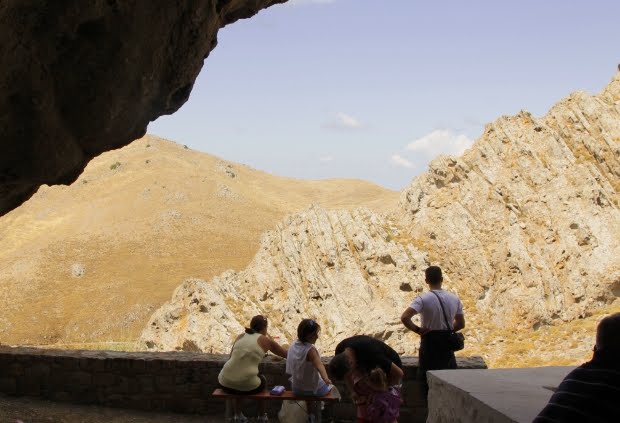 View from inside the cave.

Below: Photos from Friday's boat trip to the south coast of the island. 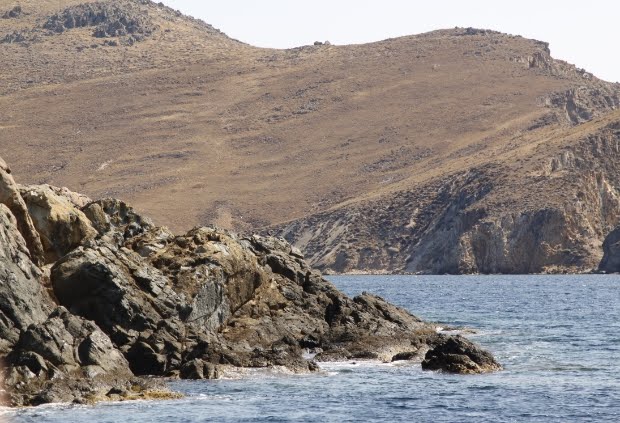 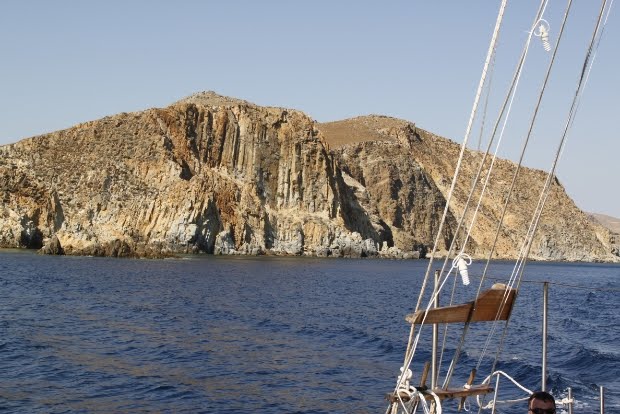 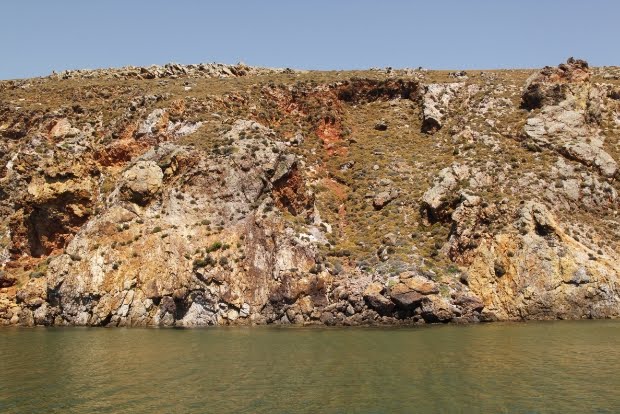 Below are some of the various textures from the scene above. 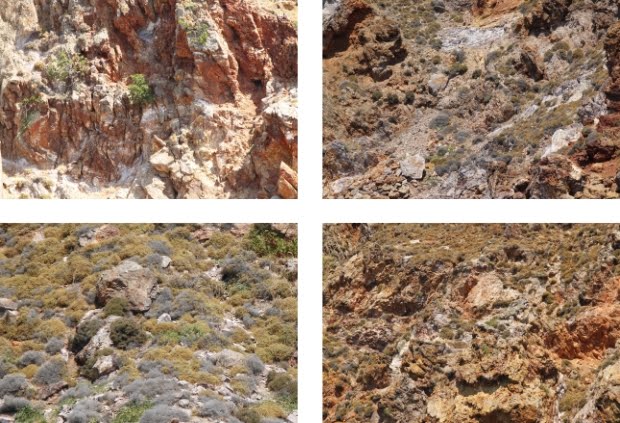 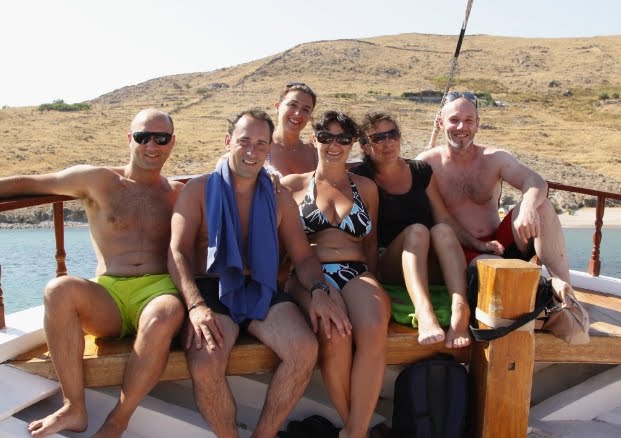 Italians are so friendly.