What day is it again?

Day four, day fourteen ... day 29? It's so easy to lose track of time in the Land of Limnos. All you become aware of are the things that all Limnians do - eat, drink, swim, walk, talk, laugh and sleep. On any given day these activities are compulsory, and to mix it up a bit you add optional extras such as visiting museums, shopping, exploring ancient sites, riding around the island on a moped, and taking millions of photos. Every day is sunny and warm. Every day is relaxed and easy. Every day has the same expectations, but there are always surprises as well. Sometimes extraordinary things happen, like seeing cats walking along the beaches at night, or four people straddling a moped – one of them a baby, and none of them wearing helmets.

So far we have been taking it really easy which has only served to compound the "what day is it again?" phenomenon. It's warmer than last time we were here, reaching about 32 degrees each day which doesn't sound too hot, but it gets to 32 as early as 7.30am and pretty much stays up there until after midnight. Our guest house, as gorgeous as it is, actually gets quite hot and it's been difficult to sleep at night. Tonight we're considering taking the mattress outside and sleeping under the stars with the owls and the spotty geckos (they're very cute, I'll have to try and get a photo of one). Yesterday we signed a three-week deal for our obligatory moped so we need to get some sleep in order to get some adventures happening on the bike!

I brought a video camera with me on this trip, with the intent to interview some of the interesting characters on the island. About a month before we left Melbourne I ordered a lapel microphone to pin to the subject's clothing, in the hope that it might help to make the sound quality of the videos more professional. Unfortunately the microphone hadn't arrived before we left for Greece, and without this extra bit of equipment I'm not quite as inspired as I was to be serious with my video techniques. In fact, so far any footage I've shot is borderline Funniest Home Videos quality ... and it's not even funny. We filmed a bit of the activity in Athens which I will try and put together in the form of a mini documentary of some sort, but don't expect anything overly informative or particularly exciting.

So the philosophy now will be to keep the filming light-hearted and very amateurish. We won't be planning any stories or interviews. The camera will be switched on when we remember to switch it on and whatever we capture, will be whatever we capture. Once we get back to Melbourne and I get a chance to edit the footage, I'll post a few of them up here on the blog. If I can be bothered.

Today we took the light-hearted, very amateurish philosophy to the extreme and decided to film our own version of the TV show "Come Dine With Me". Apparently this show exists in many incarnations around the world, but Tony and I have only ever seen the Greek version, on SBS2, which is probably the best example of how bad this show actually is. We think it's absolutely hillarious. The production and sound quality is so cheaply done, the commentator of the show is so over the top, and the script ... well it doesn't really have a script. The whole thing is so crappy, it's just totally funny.

For those who are not familiar with the show, five ordinary people are brought together for one week, and each day one person takes their turn cooking a three-course meal for the other four, in their own home. The guests judge the meal by giving a score out of 10, and the winner at the end of the week wins 1500 euro. In between shots of the host cooking the meal, the guests are asked to speculate what they think will be served up, given only a cryptic menu for clues.

So today Tony and I cooked a feast for Dad, Julia, George and Koula, in the format of Come Dine With Me, and filmed it on video. Of course the battery died on the video camera before dessert was served, but in keeping with the spirit of the TV show's level of production quality, I don't think anyone will notice! On our return to Melbourne I'll try and make something of the footage and post it up on the blog at a later date.

Hopefully after a good night's sleep tonight, we'll be up early for our first moped adventure. We're planning to head up to the natural mineral spring area of Therma. There's a day spa there which has recently been refurbished, and I'm very keen to find out about their massage and skin treatments. My rock-hard feet in particular are currently in desperate need for a complete transformation. 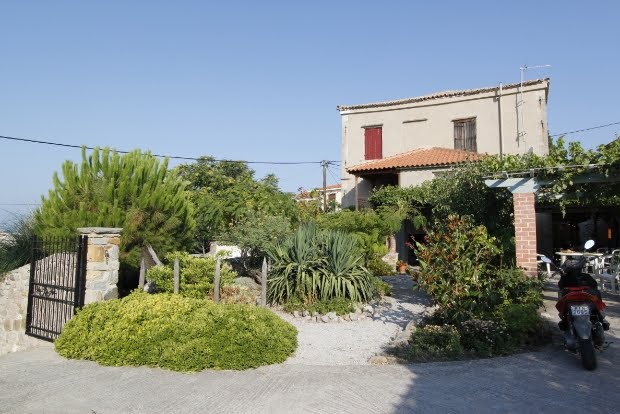 The garden at the Mavrellis House has grown a lot in two years. 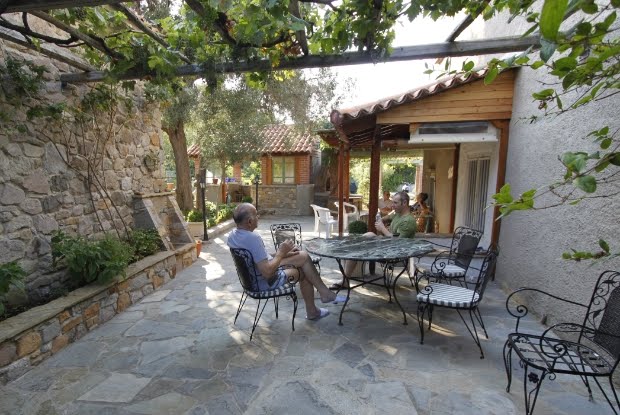 The terrace is a favourite place to just hang. 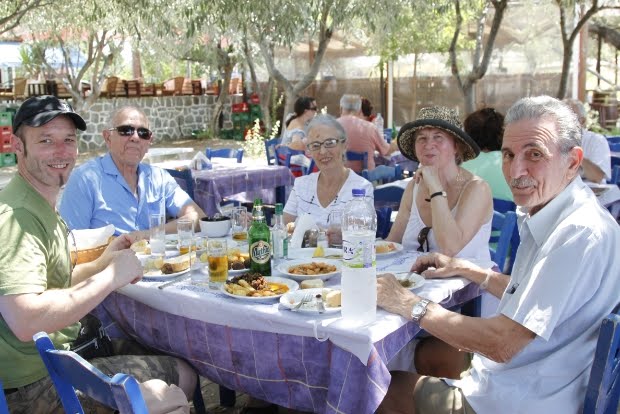 Lunch on Sunday with (from left) Tony, Dad, Koula, Julia and George at a taverna around the corner from the house. 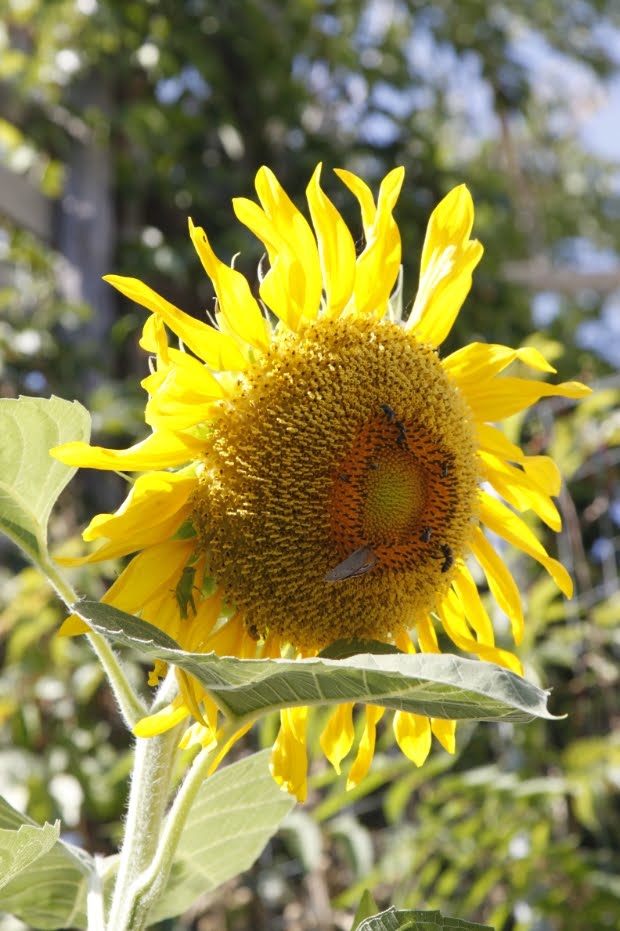 Sunflower feeding the bees in the garden. 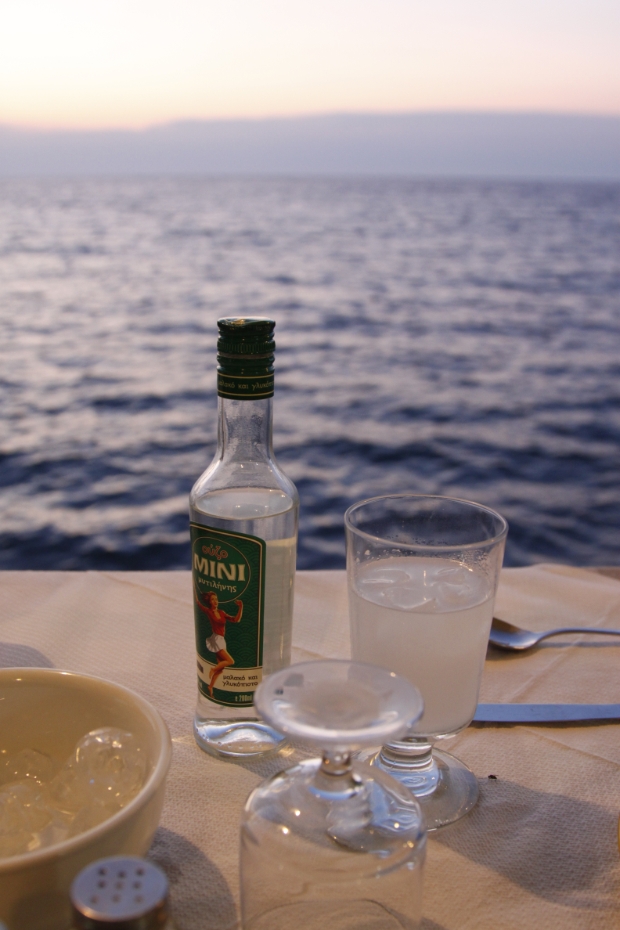 Seaside dining doesn't get any better than this. 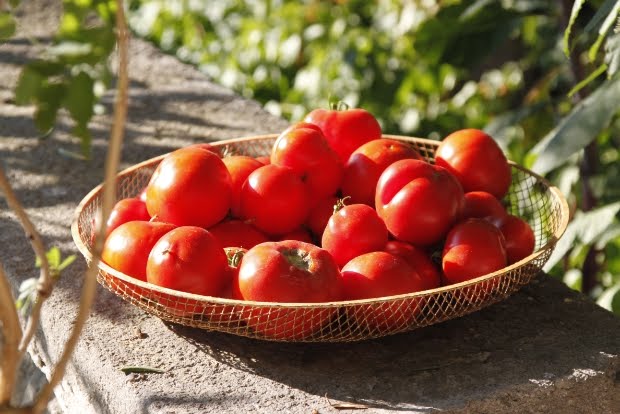 And home-grown tomatoes don't get any better than this. 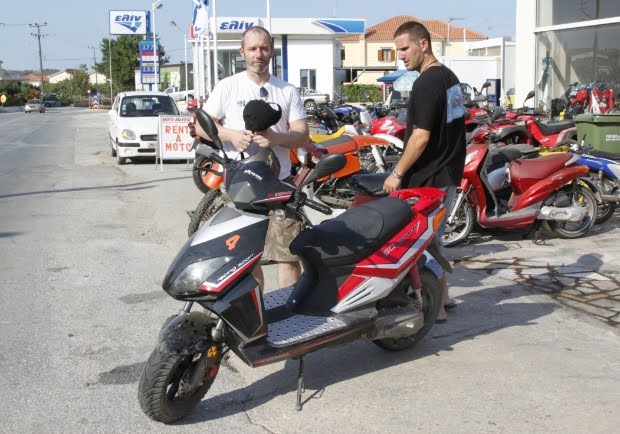 Making the moped deal with none other than a man called "George". It's rare to find a man in Limnos that isn't named George. 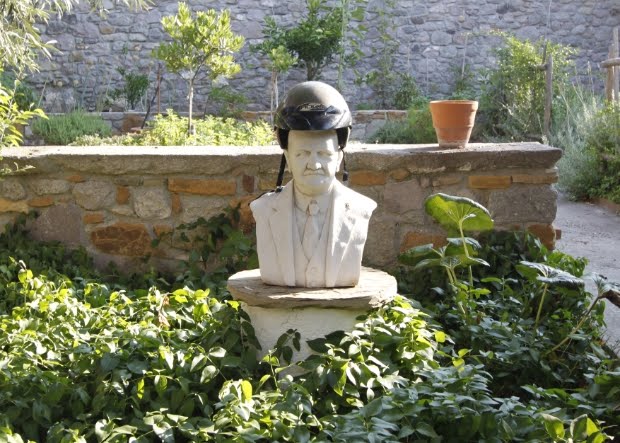 Even the marble one is called George. This is my dad's grandfather, George Mavrellis. The headstone was "taken" from the cemetary a couple of years ago – transported to the house in a wheelbarrow. Dad thought it would look much better in the garden, rather than tipped over on the cemetary ground covered in bird droppings. (Yes, it's a helmet)