It's hard work hanging on to a 50cc moped with all its vibrations and loose parts, bad suspension and jerky brakes, riding over unmade roads with rocks and pot-holes under semi-flat tyres and a hot Limnian sun. It sounds like torture, but it's actually a lot of fun. More fun of course when riding along a proper bitumen road, with views of indigo seas and hilly landscapes. The best part of it all being optional helmet-wearing. It's so cliched, but there's nothing like riding on a motorbike with the wind through your hair... (yes, I know it's not a motorbike, but the cliche doesn't quite work with "moped" slotted in there.)

The only problem is, our poor little moped (just like the one we hired last time we were in Limnos) can't make it up a steep hill without me getting off the bike first. People must wonder why the woman is left struggling to walk up the hill in the blazing heat while her "husband" waits at the top for her on his idling moped. (Everyone in Limnos thinks we're married - we thought it best to keep the shocking truth from the sensitive Limnians and just go along with it.)

So since I last wrote, we have been on a few adventures around the island on the moped. On Wednesday we visited the mineral spring area of Therma which is hidden amongst a leafy oasis that you encounter after miles of dusty, dry landscape. The spring water is warm and is piped all through the island - there are taps in all the villages that people can access to fill bottles for therapeutic drinking. The day spa there offers many indulgent treatments and I couldn't resist booking a full body scrub, aroma therapy massage and paraffin wax pedicure for this coming Monday.

As the bike is so difficult to ride for long distances, we've kept our island trips to 20km or less (remember, 20km on that bike takes about 2 hours to ride). One spot that we really wanted to go to is the church of Panayia Kakaviotissa which is located high in the mountains and has actually been built inside a large cave-like shelter in one of the mountains. The only way there is by rocky gravel road (about 10kms of it), then another half-hour rock-climb by foot. But, the first thing you have to do is FIND the rocky gravel road. After three attempts, and using a very detailed map of the island that actually has all gravel roads marked, and shows all the sight-seeing places including the church, we found many gravel roads, but could not for the life of us find this church.

Feeling bewildered, exhausted and utterly defeated, we decided to give up and rode back to the house. Having coffee with dad in the terrace was old friend Kostas from Kornos. Kostas knows the island like the back of his hand and after telling our sorry tale of disorientation, pain and gravel in our eyes, he immediately offered to show us the way to the church - it was on his way home anyway. So we followed him on the bike. Of course one of the gravel roads we had previously taken, was the one where the church was located - we had just been travelling in the complete opposite direction, which, according to the map, was the right direction. That map is now in the bin.

Anyway, we followed Kostas to the area where you have to start rock-climbing, looked up at the steep and daunting challenge we had ahead of us, then decided... we would leave it for another day. The mere thought of it was just too hard to contemplate, and we were about to die from heat exhaustion. We thanked Kostas for the guidance and headed back down the rocky road again. We will visit the church one morning when it's cooler and our bums aren't so sore!

Yesterday though, we thought it would be less painful to just keep to the made roads, and we took a leisurely ride through a few of the tiny villages on the south-west part of the island. We ended up in a lovely little seaside village called Pethino. It was destroyed in the 1967 earthquake, but has been rebuilt nicely. I had the video camera running during the ride (sorry mum, I know you must be freaking out about that) and will try and put together a little film of that adventure for the blog.

We also bravely took on the Castro mountain climb yesterday afternoon. Castro is the Venetian castle that dominates over the port of Myrina, the capital of Limnos. The Castro mountain is the only area on the island inhabited by deer, and has the most spectacular views from atop. The climb is strenuous, not unlike what we're expecting of the cave church climb, and made particularly difficult by the dangerously uneven rocky tracks that even the deer would find hard work to tackle. But it's worth every step to the top. You can see the whole world from up there!

I mentioned in an earlier post that nothing seems to have really changed in Greece with the economic problems hanging over the country. Everything seems to be still as relaxed as ever and particularly in Limnos, there's almost a feeling of "joy" in the air. Every morning the main street is filled with people going about their daily shopping and banking and taking baby for a stroll. Then every evening the streets are filled again with families and friends and young people all going out for dinner or out to the bars. It's a lively, happy place. Perhaps the people are being ignorant, or are just oblivious to what's bubbling under the surface, and perhaps it will all collapse one day, but for now, nothing has changed.

Except for one thing. And this is the one thing that both Tony and I have noticed remarkably.

Now I know some of you will laugh at this, but others will know how significant it is.

There are hardly any cats around any more. In fact, DOGS have taken over the island. It is so noticeable, even to people who don't like cats. We noticed this in Athens as well, but thought it was just the lasting result of the mass cat culling they did for the Olympic Games in 2004. But on the Greek islands, cats are iconic. This is one of the things that makes Greece unique for me. It's the cats, swanning around your feet as you eat at a taverna. It's the cats, lazing about under people's cars for shelter from the sun. It's the cats, perfectly poised on a stone wall with a blue-painted window behind them, waiting for you to photograph them. Normally by the end of a trip to Greece cat photos take up the majority of my camera's memory card. This time, after 10 days in Greece, I only have 6 photos of cats.

The stray dogs it seems, have multiplied due to them being abandoned after people realising that having a pet dog takes a lot of responsibility. Pet dogs are apparently all the rage in Greece at the moment. We've seen it everywhere in Limnos, young girls with little toy dogs. But the streets are also full of crusty diseased dogs that run around in packs like wolves. I love dogs, but it's a bit intimidating when a large group of them approaches you, wanting to lick your legs, and you don't know what they might have already been licking... Any wonder the cats have done the exodus.

We are missing the cats, but some still reside here so I will continue on my quest to photograph those last remaining darlings of the island. 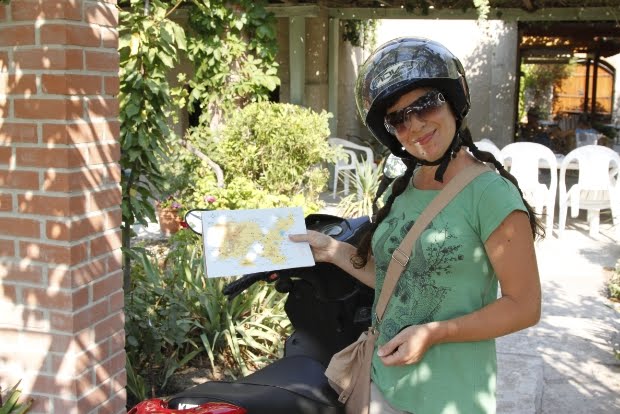 Embarking on a moped road-trip, with "trusty" map. 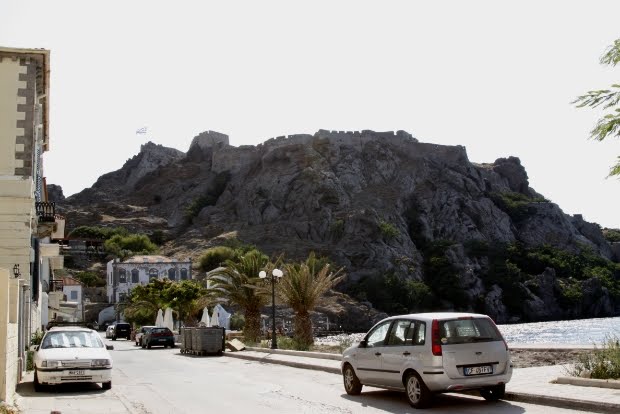 The Castro mountain climb awaits us. 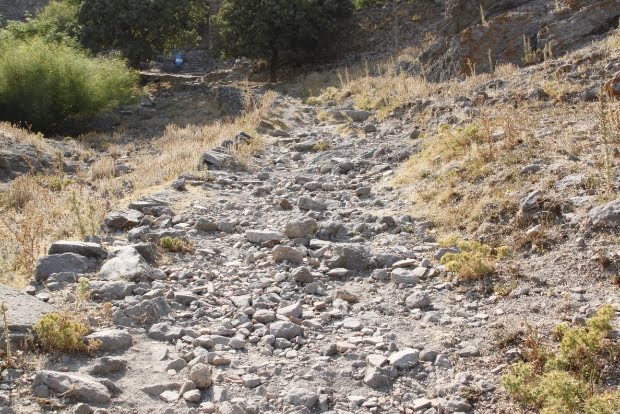 The rocky track up to the top of Castro. 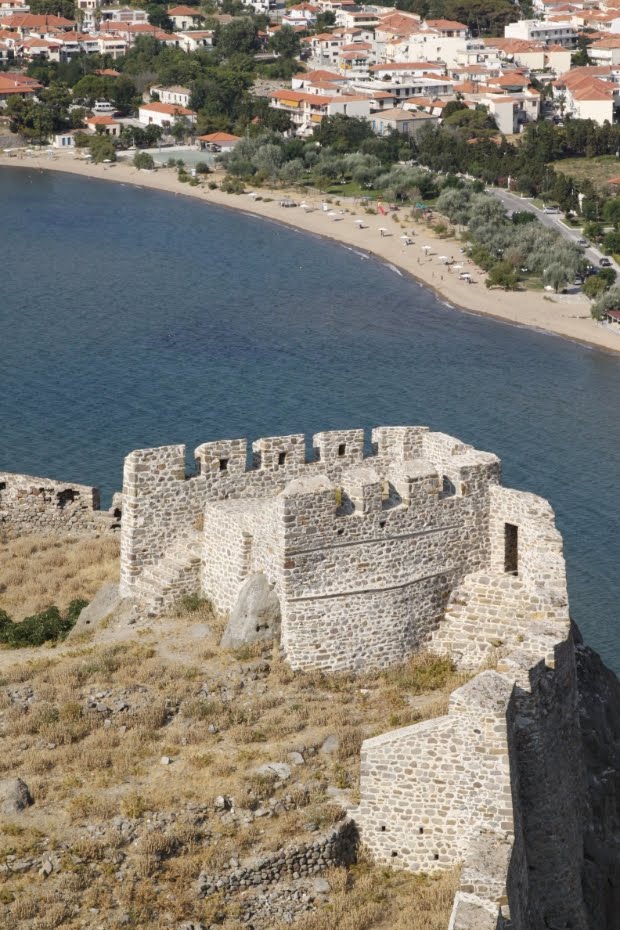 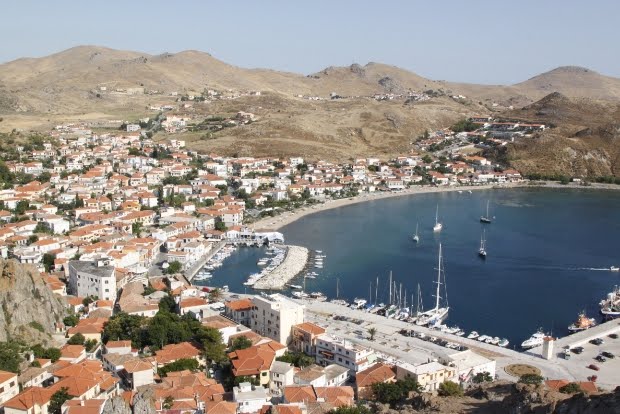 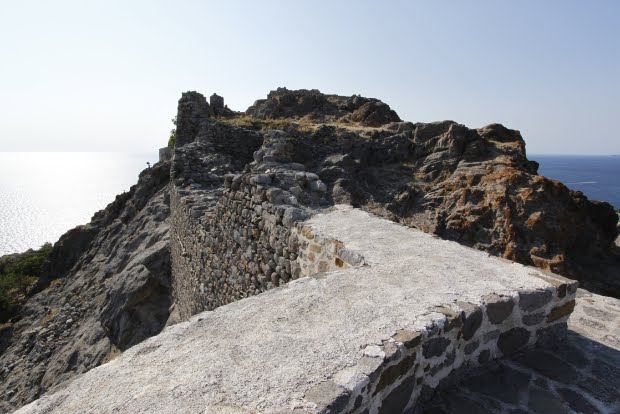 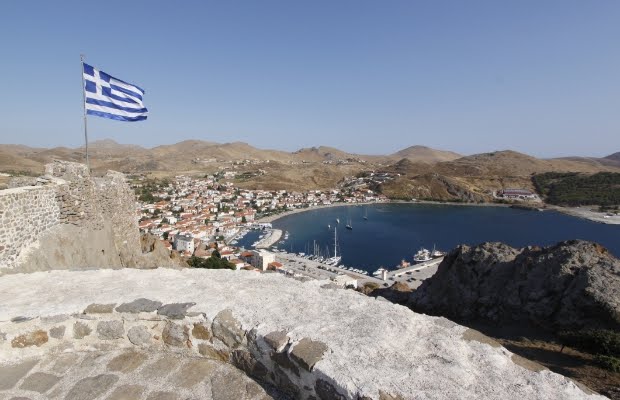 Breath-taking views from the top of Castro mountain. 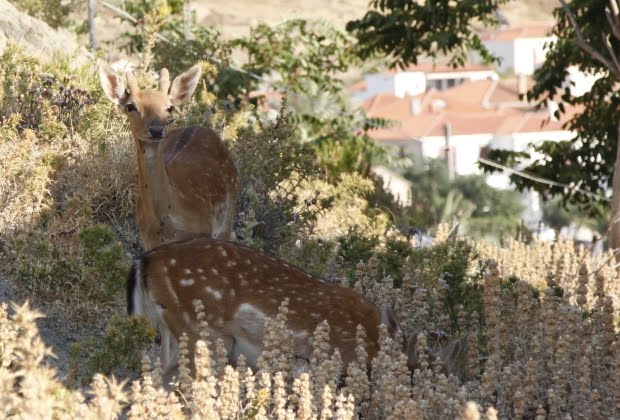 The deer of Castro. 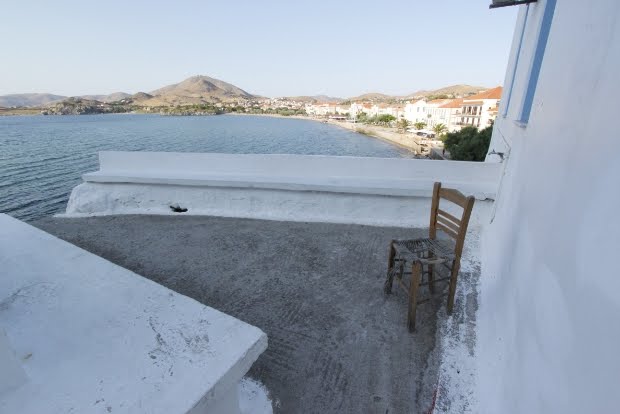 View from church half-way down Castro. 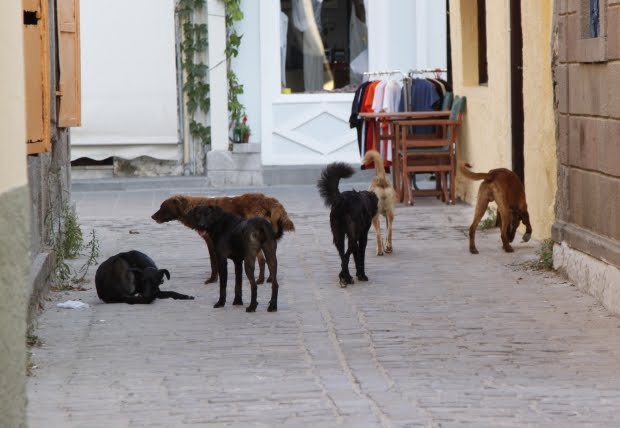 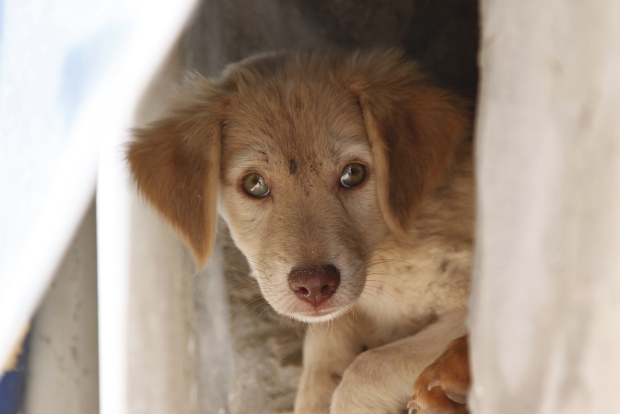 Stray pup taking shelter from the sun – there were three of them in this small space. 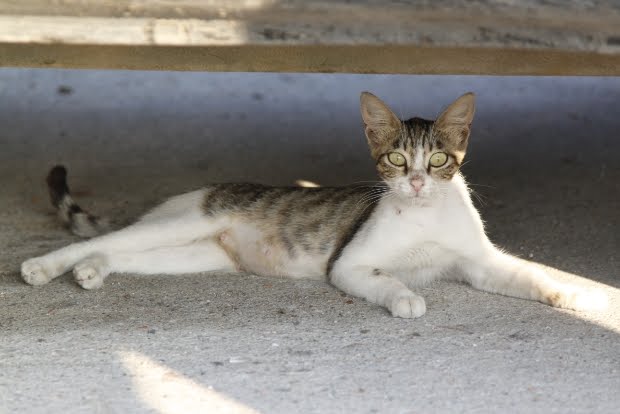 Endangered species of Greece – the cat. 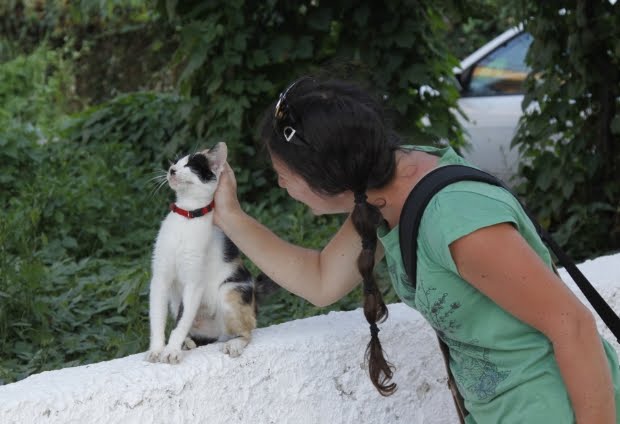 Lisou, hi, reading and enjoying your adventures,does all the climbing agree with your back?how close were the deers?when you took
the photo?Lots of pleasure to read
your stories keep writing.xx mum.

Hi mum, good to know someone's reading the blog! Climbing hasn't affected my back, if anything I think it's doing some good! The deer were about 20 feet away, they're very timid and you have to be really quiet approaching them.