Stories of the animals and the sea

Another warm and sunny day, making it oh-so-difficult to come inside to write on the blog, but there are lots of stories to tell, starting with The Walrus Still Lives. Just a warning first, this is a long and tedious story that goes for about ten paragraphs so please feel free to scroll down past it all if you want!

When last in Limnos, we were perplexed by a peculiar walrus-like creature that used to wonder around the main town of Myrina, often looking lost and confused, until we found out it was the pet chow chow dog belonging to the local pharmacist. Here is our account from two years ago:

"Let me tell you about the pharmacist's dirty brown monstrosity of a dog that some people here call a chow chow, but I'm sure it's a walrus. We see this "dog" everywhere in Myrina. Every which way you look, there it is. And it's always dirty. Especially around the latter parts of its body. Almost every day we've seen it slumped outside someone's shop, waddling down a laneway, begging at someone's feet in a taverna, or looking lost on the beach. We thought it was just another stray island dog, until today we saw the local pharmacist of all people, loading it up on his moped (yes, on his moped) to take him home."

Two years later, walking down the main shopping strip here, we were quite amused to find the same walrus still sitting outside the pharmacy, waiting for his owner to take him home. I'd decided this was something I needed to get on video, so we took position outside the shop just before 9.30pm which was the usual closing time for the pharmacy...

10 o'clock came along and the pharmacy was still doing a roaring trade. The evenings are busy in Myrina along the market parade, but the pharmacy never stays open this late. We couldn't understand it but thought we could wait a bit longer because the spectacle of a furry walrus riding a moped was worth waiting for...

Call us crazy, but we were still there at 10.30pm, and people were still piling into this shop as we watched the pharmacist enjoying hundreds of Euro takings for the evening. The walrus just lay slumped over the concrete pavement looking very dead, ignoring all the whistles and pats from passers-by, and only occasionally moving its tail in a mechanical fashion, almost like it was battery operated.

We'd been waiting outside the shop, uncomfortably sitting on a rock wall, trying to look inconspicuous for an hour and a half now, getting very irritated and questioning our sanity, but were DETERMINED to get this event on video no matter what time it was going to happen. At 11.00pm things finally started quietening down, all the surrounding shops were closing and we were feeling hopeful our opportunity was finally approaching. Even the walrus seemed to rustle a bit, lifting his heavy head up to peer into the shop to see what his master was doing.

But no, another wave of people started filling the streets again, of course many of them deciding to wonder into the pharmacy, women suddenly deciding to try on makeup, a man in a neckbrace suddenly deciding he needed all sorts of medication and supplies - WHERE WERE THESE PEOPLE COMING FROM AND WHY AT 11PM FOR GODS SAKE?!!! Tony and I just looked at each other in bewilderment, but still, we waited.

At 12 midnight on the dot, the pharmacist got up from his chair, turned off the lights, locked the shop door, got on his moped, loaded up the dog, and rode away. It all happened so quickly but we finally got the footage!!!!!!!!!!

Now, I realise absolutely no one would be interested in seeing the final video of a walrus riding a moped in Limnos, but if there is anyone out there as insane as we are, I will be posting it here when we get back to Melbourne, so stay tuned!

Revision – 2 January 2013: Finally, here is the link to the Limnos Chow Chow video.

In other news, we've been enjoying lots of food at the various little tavernas around Myrina. On Sunday we all went to Agios Yiannis for lunch at a place that's literally right on the beach, then on Monday evening we went to Kosta's place in Kornos for supper with some of his neighbours. His sister served up home-made loukoumathes (Greek donuts) smothered in sugar syrup and cinnamon as we all sat on Kosta's roof-top terrace while everyone tried to teach Tony Greek. Kosta lives in a quirky little house decorated with all sorts of weird collectables he's gathered over years from travelling through Europe and the Middle East. His decor is delightfully seventies and served as a great back-drop to the video footage I was filming of his sister Dora making the loukoumathes.

Yesterday we took a day trip to the island of Agios Efstratios on a traditional Greek "kaiki" boat. It's a 3-hour trip each way but the Aegean Sea is so spectacularly blue and the sway of the boat was so mesmerising, the time went quickly. With a population of only 300, the island is one of the rare gems untouched by tourism. Many people taking the boat trip to and from Limnos are just island locals doing their weekly shopping. We had lunch at the only taverna and walked around the only village to find that on this island, cats still prevail.

Speaking of cats, I will finish with a story about the Pharmacy Kitten. Yes, we are talking about the same pharmacy store. On Saturday night, Tony and I went for our nightly walk up the main market promenade, as most Limnians do of an evening. The pharmacy was closed, but a kitten was inside the shop, meowing at the glass front door. It was a very small kitten, no more than 4 or 5 weeks old. At first we thought is must be the Pharmacist's new pet, and he's keeping it in the shop to keep it safe. Why he wouldn't keep it in his home was something we didn't think about at the time - we were just hoping the kitten was there for a reason, and not just trapped in there.

The next day was Sunday and the shops in Limnos were closed. We went for another walk by the pharmacy store and saw the kitten still at the door, meowing, and there was poo and a hairball on the floor. It became apparent the kitten was trapped. It was very distressing watching the poor little thing meowing and obviously needing something to eat or at least some water, so Tony came up with the idea of getting a bottle of water and a straw from the nearby kiosk, and passing some water to the kitten through a gap under the door, via the straw. It was all we could do. We knew the kitten would be released as soon as the shop opened Monday morning - we just wanted to make sure it would make it through 'til then. The next day was our walrus stake-out night and there was no sign of the kitten around the shop. We assumed it had finally escaped in the morning to begin life as a stray Limnian cat.

Tonight we are off to Therma for a BBQ and some live Greek music. Every Wednesday they have these Greek-themed nights out in their beautiful garden. Oh, and my day of indulgent massages on Monday was wonderful, especially the body scrub. The only thing I had a slight problem getting used to was the completely naked requirement. There are no paper underpants in this strictly European day spa... 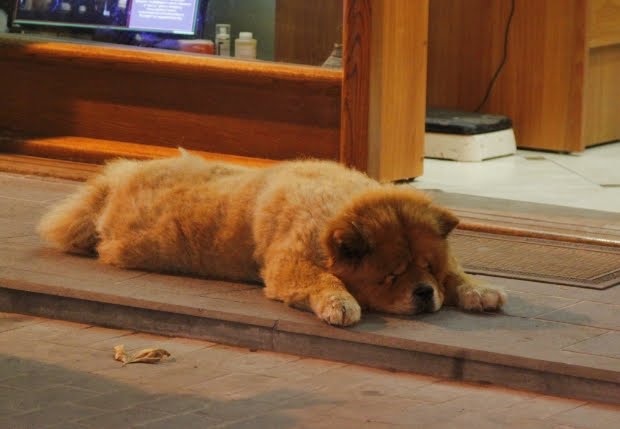 I am still The Walrus. 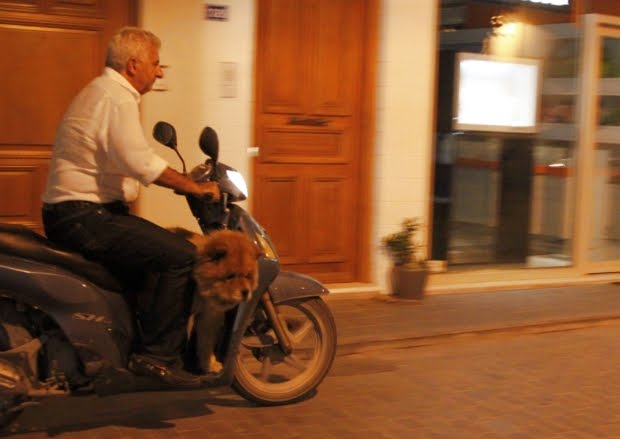 And I still ride a moped. 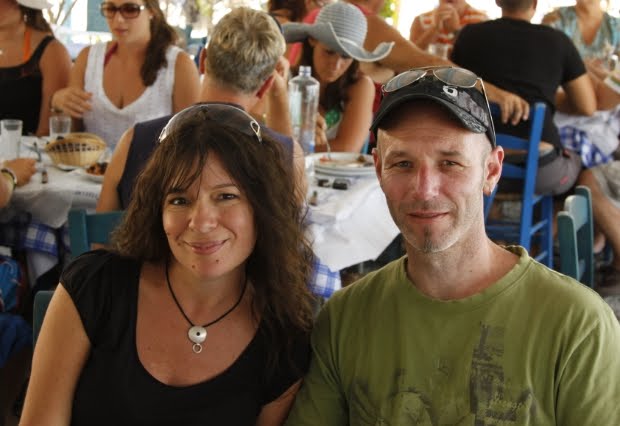 At a taverna in Agios Yiannis, right on the beach. View below is from the taverna. 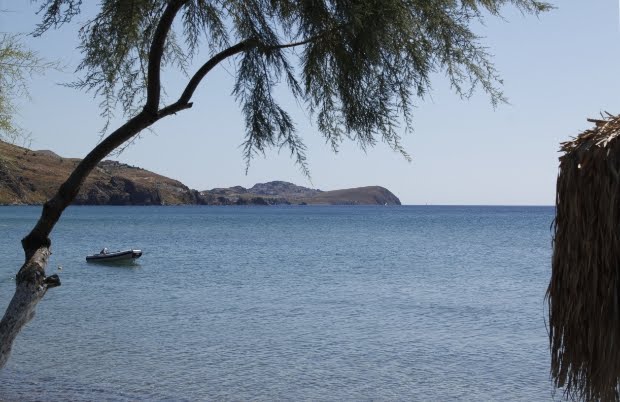 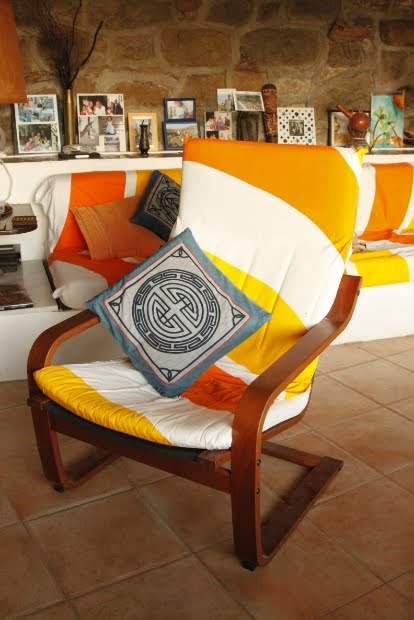 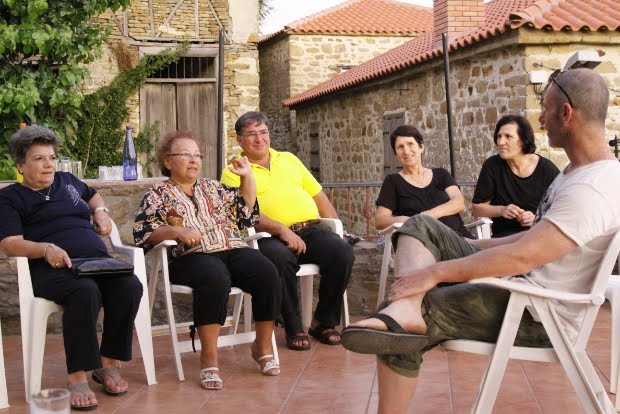 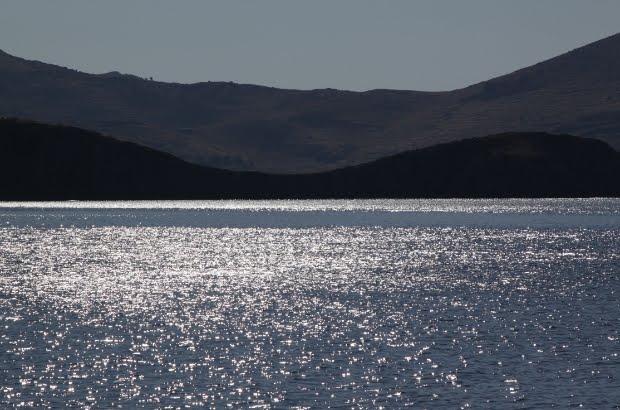 Early morning departure on the boat to Agios Efstratios. 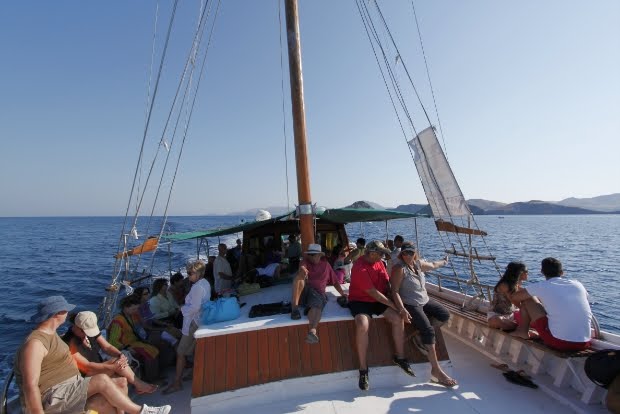 Enjoying the sway of the Greek "kaiki" boat. 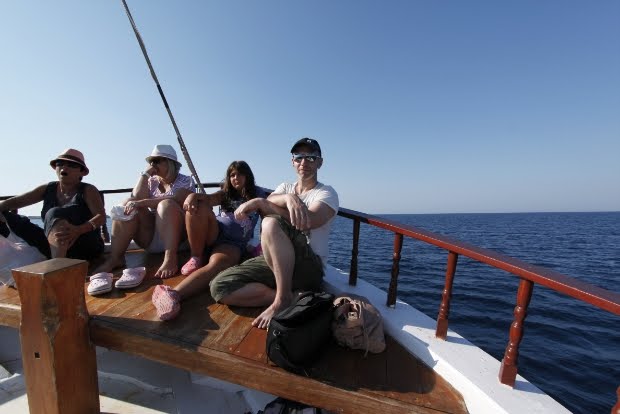 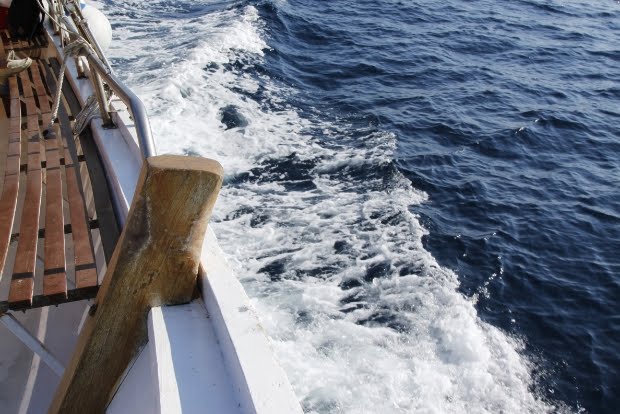 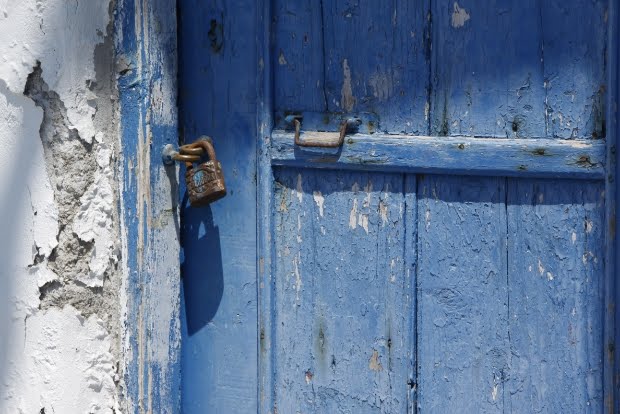 Doors and windows of Agios Efstratios. 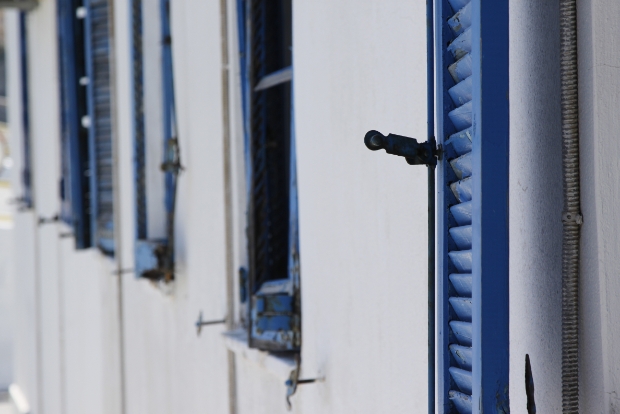 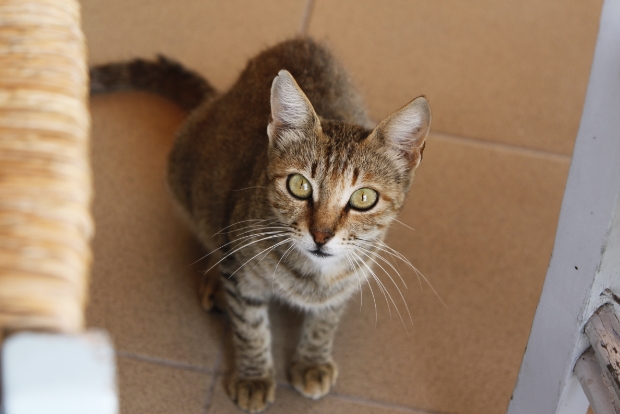 The cats of Agios Efstratios. 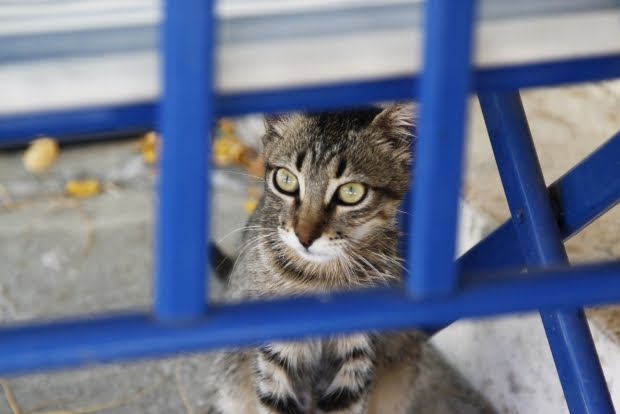 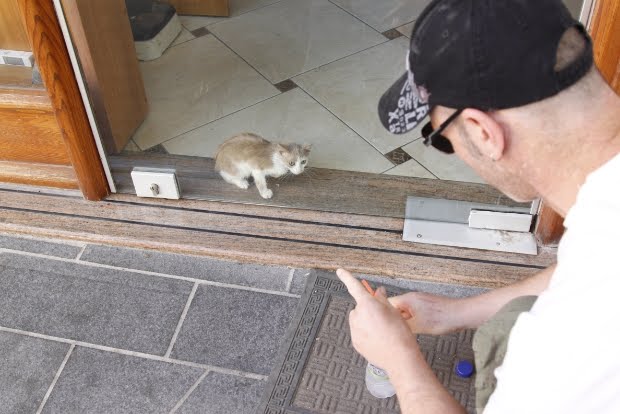 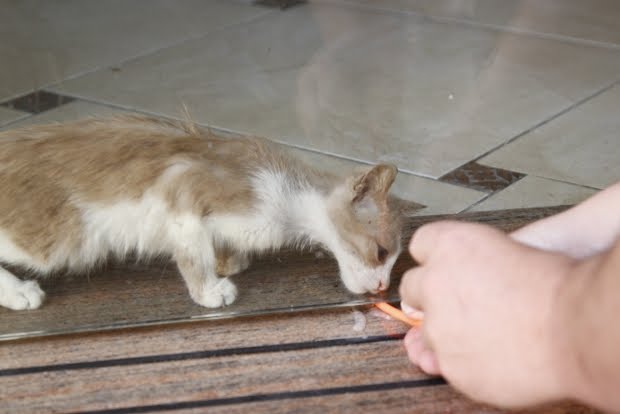 Hi guys
I am loving reading your travel stories and looking at the great photos ... I am so envious. My only complaint is ... I want more stories. Great writing – very entertaining.
Nicola x

Hey Nicola, good to hear you're enjoying the stories, and don't worry, there's more to come - so many funny things go on in Limnos, I'm planning on posting an "Only in Limnos" entry soon. And Tony's writing one now about the dining experiences in Limnos.. It's a crazy place...

so many good photos!loved the one with Tony and his greek teachers.The little church in the cave very unique! From the greek menu try the tomatokeftedess your dad's name day was on the 15th August as well. you're both great storytellers, really enjoying reading them. xx mum.