As we pass the half-way mark of our Limnian tale, the weather has taken a strange turn. We experienced a deluge of rain on Tuesday (the locals say it was more rain in one day than Limnos received during the whole of last winter - something like 10 inches), but today we have received another enormous deluge of rain, equal to the volume of Tuesday's rain.

The Greek news (the Greek National Exaggeration News) reported that Turkey has encountered its worst floods in 800 years (do their weather records go that far back?) (do they keep weather records at all? ... A few years ago dad needed to get a copy of his birth certificate from the Greek births and deaths registery only to find they had no record of him ever existing. Do you really think neighbouring Turkey would have 800-year-old meteorological records?)

So it's raining Greek cats and dogs today and all we can do is retreat indoors with woodwork and cooking projects, and to shake things up a bit we thought we'd have a bit of a role-reversal day - ladies in the workshop, gentlemen in the kitchen. Julia is staining a bookshelf dad made, and I'm sanding down an art-deco coffee table, while dad and Tony are preparing a lunch of baked salmon, roast potatoes and cauliflower, and reheating a beautiful stew of chickpeas, onion and tomato that Veta brought over... Right now I can hear the grocery man on his megaphone, slowly driving around the streets of Myrina in his van as he does every day at this time, loaded with potatoes, prawns, eggplants and tomatoes, his own mobile market, like the icecream man but without the wind-up music, just his monotone voice over the megaphone "patatez, yarithez, melitzanez, domatez..."

On Wednesday it was my birthday and the four of us went out for dinner with Tony and Despina at a charmingly traditional Greek taverna in the village of Sardes. The walls were adorned with farming implements and cooking utensils of a bygone era, as well as black and white photos of many of these objects in actual use - the bygone era being not so very long ago at all. We had the usual feast of way too many plates on the table but still managed to consume every bit of it.

Yesterday the skies had cleared and the warm sun made a fresh appearance to rising steam and a really bad hair day. However, I've found a hairstyle that defies all bad-hair scenarios - two ponytails with increments of elastic bands all the way down each lock to the tip. Tony thinks I look a bit like a ragdoll but I don't care. Anything to avoid the frizz.

And to finish this entry I must tell you a cat story. (Cat haters tune out now.) When we arrived here just over two weeks ago, we met shy little "Katarina" and her one-eyed brother "Yiorgos" (yet another George) - two little kittens that visit the house at the same time every day for their cat lunch (leftovers from the human lunch). In such a short time we've watched them almost double in size, and now they've invited their mother along, who is already pregnant again, so there's anything up to 10 cats we're actually feeding now every day. Needless to say, we had to buy extra bags of cat food to supplement the leftovers...

Oh, and I have a dog story too! The other day we were practicing sand tennis in the yard when three little stray dogs came trotting up the driveway. Two scruffy, brown-stained terriors and a black and white jack russell, looking like they were on some sort of serious mission to find a bit of food and a few pats. Feeding them would have been the worst thing we could do as they would immediately establish themselves in the garden as permanent residents. But we thought a bit of a pat wouldn't hurt. They couldn't get enough of our brave offerings of ear scratches (probably the most revolting animals I've ever touched, but you know me and animals) but when it was time to go (when we heard dad and Julia coming out of the house to see what was going on) we gently chased the little dogs back down the driveway. That night, Tony and I went down to Romaikos Yiallos for dinner, and on our way home, as we approached the driveway of the house, I said to Tony "wouldn't it be funny if those dogs were back in the yard". And there at the top of the driveway, guarding the grand entrance, were these three little dogs, just staring back at us. It was the funniest thing I'd seen in such a long time and I couldn't help but stand there for a good five minutes just laughing uncontrollably at these serious little guard dogs, just sitting there staring back at me like "what's so funny", and as soon as we started walking up the driveway, all three at once started barking and growling and gnarling their teeth like we were trespassing their newly-claimed property!!! And what a find they must have thought they'd scored. It didn't take much to put an end to their little fantasy and chase them back down the driveway though.

Animal stories finished, I promise. Here are some photos...

Negotiating a narrow street on the moped. 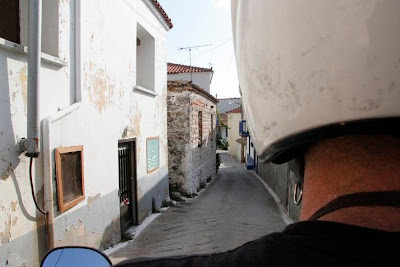 Deluge in the garden. 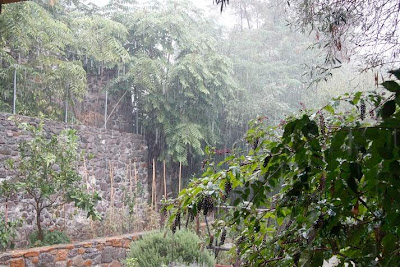 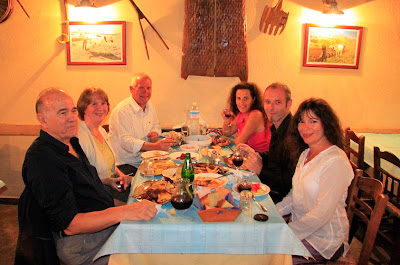 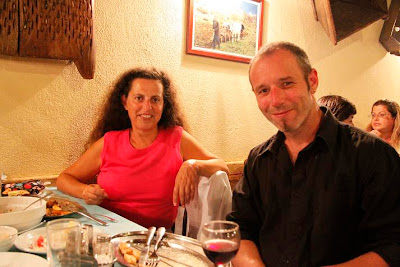 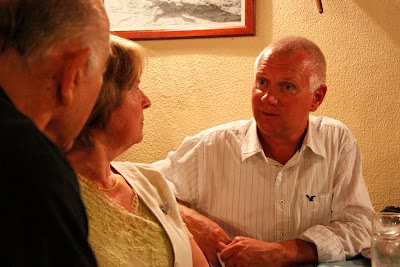 Another dinner conversation at Sardes. 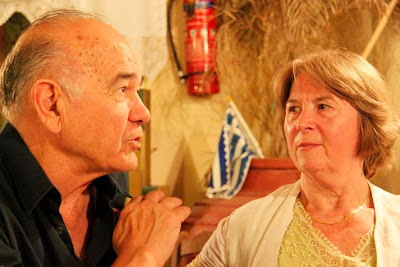 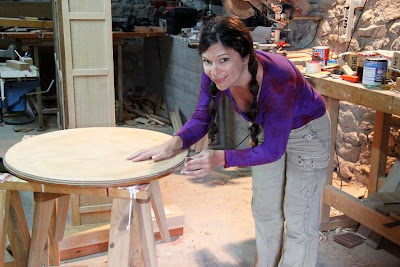 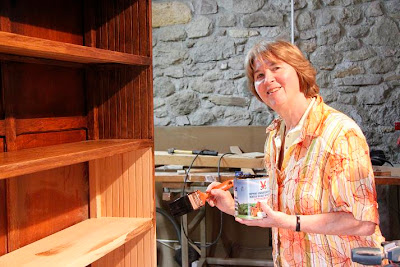 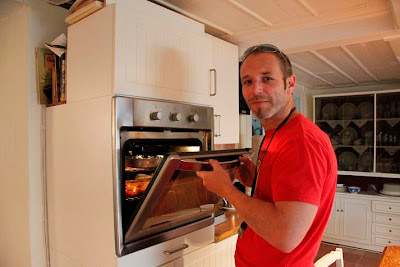 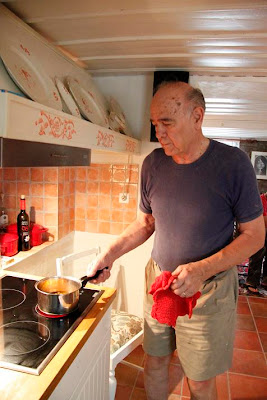 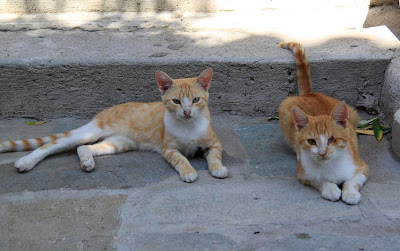 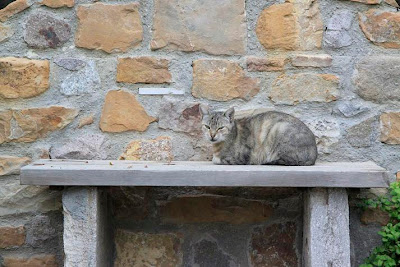