It's Sunday afternoon and I have a few minutes to begin the next entry for this blog before we all settle in front of the tv to watch the Greek cooking show, "Boukano ke Synghorio", which loosely translates as "excuse me while I have one bite of the food before we eat the meal" (actually, dad found this very difficult to translate so it could be completely wrong - any Greeks out there want to offer a better translation?) ...

... It is late in the evening now and we have just come home from a light dinner at one of the beachside tavernas at Romaikos Yiallos which is the main stretch of tavernas here in Myrina. The plastic windshields around the tavernas were all down tonight as it's blowing a gail out there – our boat trip on the traditional Greek caique around the island was cancelled today and it was the first day the sun decided to retreat behind an overcast sky. It's a bit of a novelty actually, to see a change in the relentless weather pattern of sun, sun and sun (it's even supposed to rain tonight) but we were disappointed about the boat trip being cancelled.

Time for bed now, but I will continue tomorrow...

The last couple of days we have had a chance to explore some more of the island. On Wednesday afternoon we took the moped to Tony and Despina Whitefield's hometown of Karpasi, about half an hour from Myrina. They usually only spend a few weeks a year here in Limnos, but this year they are taking long service leave and are here for three months. Into their third month they are well and truly part of the landscape now.

We'd just missed the sunset upon arrival at their quiet little village, their rooftop terrace having an expansive view of the Karpasian valley and distant hills, but the sky was still glowing red which was brilliant. We spent the evening nibbling on fried eggplant, sweet tomatoes, homemade village cheese and chargrilled chicken, all washed down with "fire water". I'll get to that in a moment, but first I need to explain that bottled water is a necessity in Greece as the heavily chlorinated tap water is undrinkable. So at meal times there's always a 1.5 litre bottle of water at the table, sometimes two bottles. At Tony and Despina's there were two bottles. However, one was "water" and the other was "fire water"... otherwise known as home-brewed ouzo (courtesy of Despina's cousin, yet another George). The only problem was, Tony B kept getting the two bottles mixed up - a bit of ouzo in the glass, topped with a lot of ouzo in the glass. It was a late and challenging night of getting the mix right, but a lot of fun.

The next morning Tony W and Des took us on a walking tour of their village - a largely neglected town with many abandoned ruins, surrounded by grassy fields and farmland. During the war the German soldiers took over the village and moved into the homes of the locals, including Despina's grandmother's house (the house we stayed in). I'd imagine twelve people in a two-roomed house would have been a bit tight and pretty scary.. but Despina's mother, who was a little girl at the time, remembers the Germans treated the family very well, so much so they all became good friends - they even invited the soldiers to one of the cousin's weddings! That's Greek hospitality for you!

We also visited the villages of Atsiki and Varos, ending up at the fortress of Kotsinas where the bronze statue of Maroula stands. In 1447 the Turks attacked the then thriving town of Kotsinas, which was valiantly defended by Greeks and Venetians. The peak of the battle was the appearance of heroic Maroula. When the young woman saw her father, General Isidoros, killed by the sword of a Turk, she grabbed the sword and attacked the enemy. The Greeks and Venetians took courage from her bravery and succeeded in driving the Turks off the island. From then on, Maroula became a symbol of freedom-fighting in the whole of Limnos.

Thursday afternoon it was finally time to put the sand tennis bats to the test, so off we trotted to the beach with our brand new jarrah-handled bats and "One Euro Shop" tennis balls. The beach is well populated on these warm Limnos afternoons, with plenty of sun bathers and always a large number of sand tennis players, but we managed to find some space and excitedly began our first "rally" of sand tennis. By "rally", I mean a maximum of 2 hits. One hit each that is. And as if it wasn't embarrassing enough to be playing so pathetically in front of a beach full of the national team of professional sand tennis players as they rallied at least 50 hits a go... just imagine how hillarious it all would have looked to the sun bathing spectators when our tennis balls started to split in half (yes, all three of them) and completely lose their bounce. We went home after about 10 minutes.

On Saturday Dad, Julia, Tony and I took a drive to the other side of the island to Moudros for lunch. During WWI more than 30,000 soldiers were brought to Moudros from Gallipoli to recover (or die) from their injuries. We visited the cemetery where many gravestones of Australian soliders lie. We ate at a large seaside taverna in Moudros - another table covered in food, another taverna ruled by cats, another beautiful day. Then yesterday Tony and I found a lovely family-owned little taverna in Agios Yiannis, on the coastline just north of Myrina, where we had yet another colossal lunch (we really must stop eating). The menu at this little taverna was one of the more interesting menus we've had to decipher here in Limnos, with such delicacies as "Boiled Coat", "Roast Lamps" and "Fried Scrimps". For the Limnian locals, Greek to English translation is not one of their strengths.

It's now Monday and we've had another overcast day, so it hasn't been such a chore to come in and write today. The forecast says we will have two more days like this then it will be "back to normal". In the meantime, we might visit the museum .. might also be a good idea to get ourselves some proper tennis balls.

Loaded and ready to head out to the vineyards of Karpasi to go grape-picking. We were wondering if they would be able to recreate such optimised stacking once the crates were full of grapes... 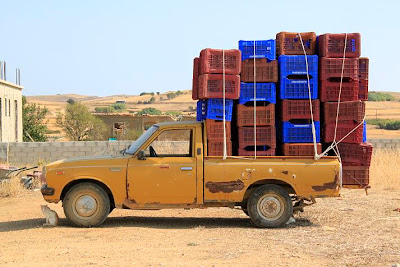 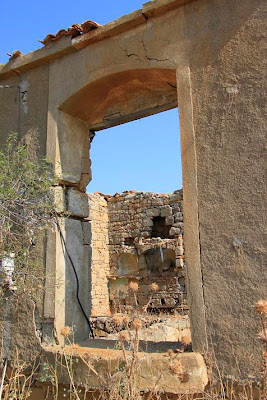 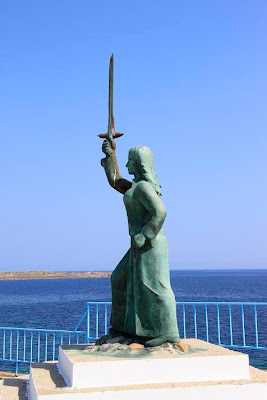 On the roof-top terrace at Tony W and Despina's house, Karpasi. 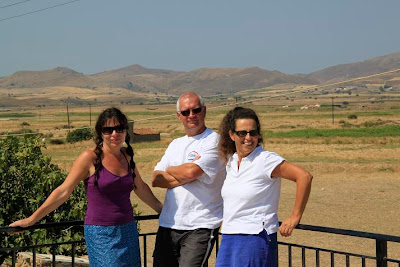 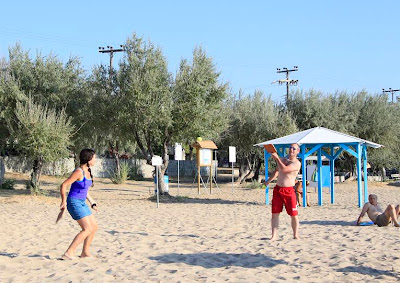 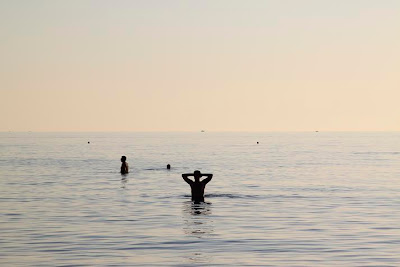 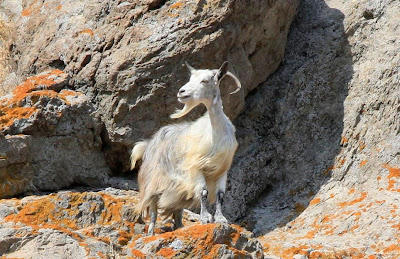 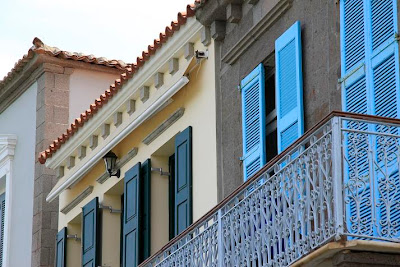 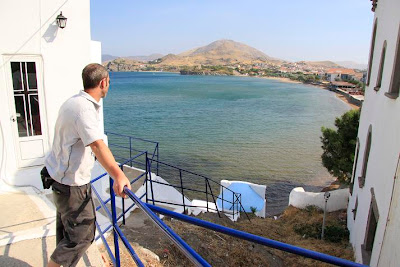 Dad and Julia at Moudros taverna. 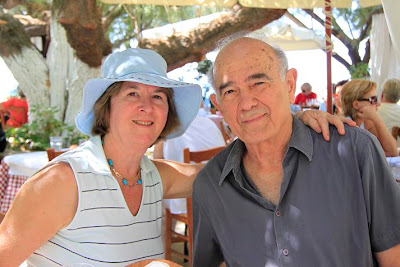 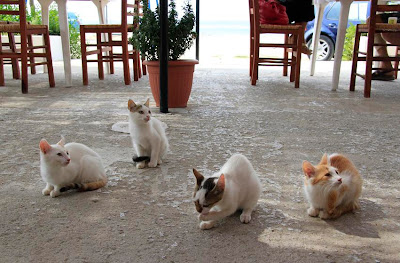