Riding the moped and drinking ouzo

It's Monday afternoon, we've been in Limnos for a week, and the sun hasn't stopped shining. It's 31 degrees today, I've just come in from a wander down the cobbled laneways, armed with my camera and, believe it or not, SUNGLASSES (as some of you know, not my favourite accessory) but with all the whitewashed walls and endless sunshine, I have no choice!

At the moment Tony and dad are in the workshop making wooden bats for us to play sand tennis on the beach - "sand tennis" is simply hitting a tennis ball between wooden bats, but seems to be the official sport of Limnos as all the locals, young and old, engage in this activity on a daily basis. We figure that playing a bit of sand tennis might be a good way to shed our tourist status (Tony needs all help he can get since he's reluctant to part with his variety of tourist adornments: several bum bags (yes, there are three, and he likes to wear them all at once. "they're for all my diabetic things!" he claims), "NYPD" cap, mirrored sunglasses, backpack. Need I go on?)

So we hired our moped a couple of days ago from "George" whose shop is only open when he feels like opening it. Finally, after our sixth attempt, we made our routine stroll to his shop to find it OPEN, and negotiated a deal of 8.50 euros a day for a three-week hire. On Saturday we took the bike through the villages of Plati, Thanos and Kontias, a 2-hour round trip that blew us away with such contrasting landscapes, the most beautiful calm beaches, fire-stricken mountains, the narrowest of roads that made you thank god we were on a moped, open dry fields of rocks, wild grasses and windmills, and the most magnificent blue sky I've ever seen.

After experiencing some difficulty reaching 15kms an hour going up hills, today we exchanged our 50cc "Typhoon" moped for the more powerful "Super Sports" model. I still have to get off the back so Tony can get it up the driveway though. But going slow is my preference on these crazy Limnian roads (and I'm sure mum is feeling slightly relieved about that too). There is no shortage of unbelievable driving antics by the locals - driving on footpaths, going through red lights (there are two traffic light intersections in Limnos, which have been here a number of years now, but the locals still don't know what a red light means), and because pedestrian cats, dogs and people prefer walking on the road rather than on footpaths, for the crazy drivers it's a chaotic game of dodge this cat, swirve that person, and narrowly escape killing that dog.

Yesterday we took the opportunity of a windless morning to climb the "Castro" of Myrina. Myrina being the capital village of Limnos; the Castro being the hill upon which the ruins of a 14th Century Venetian castle remain. The view from the top is breathtaking. As is the fear factor! There are no barriers to be found anywhere along the perimeter of the castle - the sheer drop of around 300 metres that confronts you as you step towards the stone wall, thinking there's just another path that continues beyond, is positively frightening. You wouldn't want to bring your kids here. But what a view.

In Greece they eat big lunches in order to leave little room in their stomachs to go light on dinner, but somehow that theory isn't working for us. We're having the big lunches alright, but we're also managing big dinners, too easily. The festive spirit is so prevalent here, it's hard not to eat and drink every time someone walks through the wooden gates at the house. Dad and Julia are friendly with all the neighbours, and inevitably someone or other is always joining us at meals times, or "ouzo" times. Yesterday Panayotis brought around a bottle of his home brew - a much sweeter version of the awful aniseed ouzo we're familiar with - a few olives and home-grown tomatoes and apple cucumbers, fresh bread and feta, herbed sardines and lots of lemon wedges. We all sat around in the courtyard, talking, eating and drinking. This is an "ouzo time".

This afternoon we're going for another adventure on the "Super Sports". I tried to eat less today for lunch, in order to get up those hills.

But first, here are some more photos...

George and Koula in "their" chairs in the courtyard, working their worry beads. 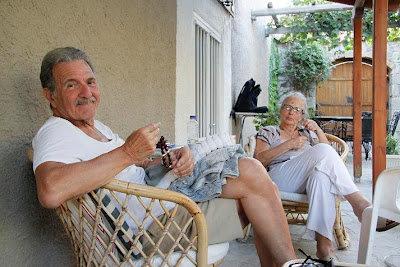 Tony doing what he does best: preparing the BBQ for a feast of chicken drumsticks, stuffed mushrooms and chargrilled zucchinis. 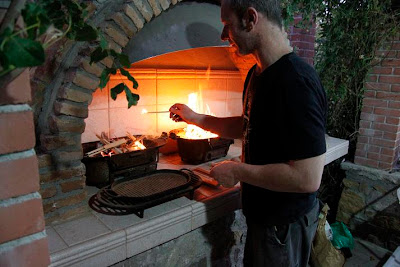 The result of the BBQ feast. Panayotis (ouzo man) on the left, and his wife Veta with the orange top. The rest you should know by now.. 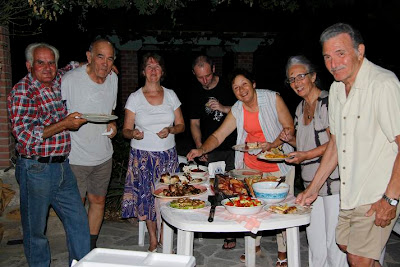 Our local beach - Riha Nera beach - and Mt Athos in the distance. Mt Athos (2033 metres) is on the mainland of Greece, in Thessaloniki, almost 200kms away. 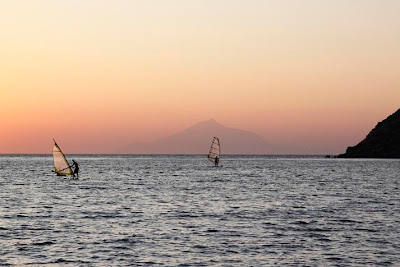 The Typhoon and the Tourist. At Plati Beach. 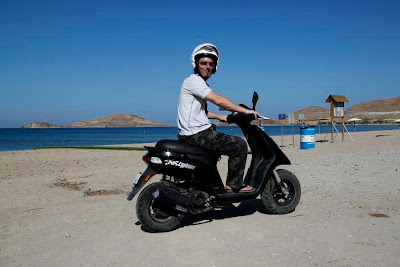 The Pillion. And fire-ravished mountains. (See? We're even wearing helmuts!! None of the Greeks do.) 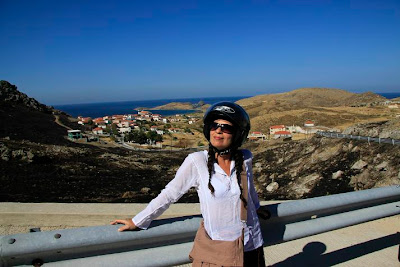 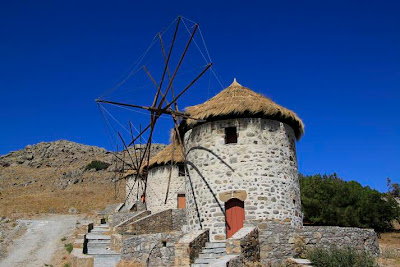 On the climb up the Castro. 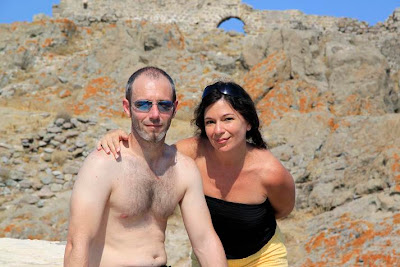 View from the Castro peak. 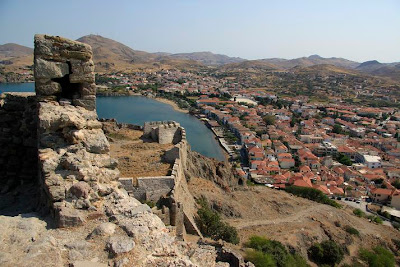 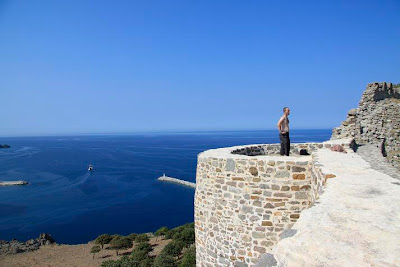 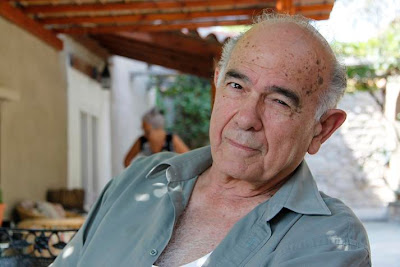 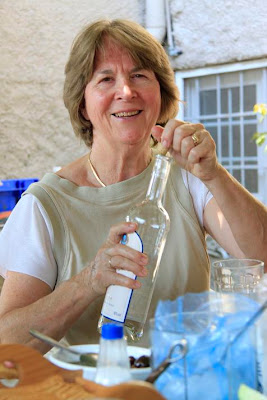 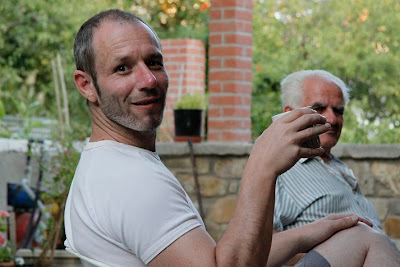 And to finish off - a cat. Of course. 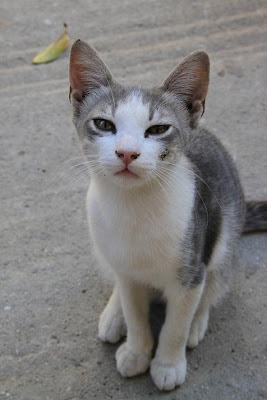 Until next time..
Lisa